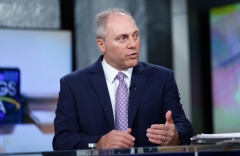 (CNSNews.com) – House Republicans gave moderate Democrats many opportunities to vote with them for the past two years, but they rejected their offer and voted with House Speaker Nancy Pelosi (D-Calif.) and Rep. Alexandria Ocasio-Cortez (D-N.Y.) 90 percent of the time, House Minority Whip Steve Scalise (R-La.) told Fox Business’s “Varney & Co.” on Friday.

Fox Business host David Asman asked Scalise whether he thinks House Republicans can actually work with moderate Democrats against the will of the radical members of the Democratic Party.

“If you look at where these members are, they’re not moderates anymore. They’re liberals versus the socialists on the Democrat side, and frankly, a lot of those liberals were voting for the socialist agenda the last two years - everything from the Green New Deal, the Medicare-for-all to defunding the police and raising taxes. They voted for it,” Scalise said.

“The voters rejected them, and now they’re yelling about it. If they just voted with us and worked with us on a lot of things, they wouldn’t have had those problems, but regardless of that, we’re going to continue fighting for the conservative beliefs we have, and we have at least a dozen more members coming in than we had before to join us in the fight,” the congressman said.

“We have a great new class of Republican freshman and a lot of energy that they're bringing to fight socialism, so if they're going to try to move a socialist agenda, we’re going to fight it tooth and nail, and it'll be rejected at the ballot again, and we’ll win the majority back,” he said.

When asked whether he has thought about ways to get moderate Democrats on the side of the House GOP on particular votes they care about, Scalise said, “Yes, we've given them opportunities the last two years, and they’ve rejected it. They voted with Pelosi.

“Every one of them voted over 90% of the time with Pelosi and AOC, so kind of hard to call yourself a moderate when you're voting with socialists 90 plus percent of the time. We will give them opportunities in the next Congress, and we’ll see where they go. Ultimately, they’re gonna have to make that decision, but they're having a big internal fight right now, because AOC’s not going to let up, and she's pushing Pelosi to be even more far to the socialist left, and that's not where America is,” he said.

Scalise spoke to reports that former Vice President Joe Biden is considering Sen. Bernie Sanders (I-Vt.) as labor secretary. He said winning the two Senate runoffs in Georgia are the key to holding on the Senate and preventing the implementation of socialist policies or even a socialist cabinet pick.

“Bernie Sanders’ socialist approach was rejected in the Democrat primary. I know Joe Biden tried to adopt a lot of it anyway, but then he tried to run away from it in the end, because he knew it was very unpopular with the public. This is where the Senate’s very important. Those two seats in Georgia are very important,” he said.

“When Chuck Schumer in New York tells people, we can change Georgia, we can change America, I don't think people of Georgia want to give their two Senate votes as a proxy to Chuck Schumer to implement New York values in Georgia, so that's what's at stake in Georgia, and ultimately, if we hold the Senate, the ability for them to move socialism through the Senate or even socialist cabinet picks through the Senate would be very uphill,” Scalise said.

“The American people rejected socialism in a lot of ways. Look at Miami alone. We flipped two Democrat House seats in Miami to Republican because a lot of people, especially the Cuban population there that fled socialism, they don't want to see socialism brought America,” the congressman said.

As to whether there will be another stimulus bill before inauguration, Scalise said, “There’s not agreement now, but I would like to see us get another round of PPP loans. There’s wide agreement on that. Pelosi needs to stop holding them hostage for bailing out failed states like New York and California.”