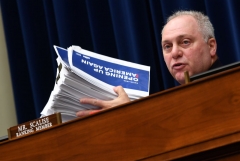 Representative Steve Scalise (R-LA) holds up a stack of safety regulation documents during a House Subcommittee on the Coronavirus Crisis hearing on a national plan to contain the COVID-19 pandemic, on Capitol Hill in Washington, DC on July 31, 2020. (Photo by KEVIN DIETSCH/Pool/AFP via Getty Images)

(CNSNews.com) – For Democrats to suggest that there is no plan to deal with the coronavirus as the title of a House Oversight and Government Reform Committee hearing suggests is “a false political narrative,” Rep. Steve Scalise (R-La.), ranking member of the committee, said Friday.

Scalise used his opening statement for the hearing titled, “The Urgent Need for a National Plan to Contain the Coronavirus,” to emphasize that President Donald Trump has a plan for dealing with COVID-19.

The congressman also pushed back on false reports that National Institutes of Allergy and Infectious Diseases Director Dr. Anthony Fauci specifically has been sidelined, noting that his presence at the hearing contradicts that theory. Fauci was joined by CDC Director Robert Redfield and Admiral Brett Giroir, assistant secretary for health at HHS.

“You wouldn't even be here today if there wasn't a plan because you are the people tasked with carrying out the plan. In fact, if you were sidelined, you wouldn't be here either, and I know some people want to suggest that, but maybe they haven't spent time reading different components of the plan,” he said.

Scalise held up a stack of documents, which he said were guidelines on how states and schools could reopen and how nursing homes should deal with COVID-19.

“These are just a few, by the way, a few of the documents that your agencies have published to show states how to safely reopen, to show schools how to safely reopen, to show nursing homes how to care for their patients, which, by the way, if all governors would have followed those guidelines, thousands more seniors in nursing homes would be alive today if just five governors would have followed your plan that was developed by President Trump and is being carried out by you and your teams effectively every day,” he said.

The congressman said millions of Americans are alive today because President Donald Trump released an “effective plan to keep Americans safe as we learn about this virus, as we work to get a cure for this virus.”

“When you look at the work that's been done, we might not agree on each part of them, but we've had a number of hearings where we've talked through how to improve testing. In fact, one of the first hearings we had in this committee on testing was back when America was maybe conducting less than 200,000 tests a day. Today because of the work that you all have been doing and because of the president's plan, we are at over 800,000 tests per day and that number continues to grow,” he said.

Scalise also wondered why there hasn’t been a hearing on China’s efforts to prevent the United States from entering the country to find out more about the virus when it was first discovered.

Nobody's stopping or resting on their laurels, but when you look at that trajectory, again going from a virus that no one knew about just six months ago, which China lied about during that period where we could have learned a lot more, where could have saved more lives while China was lying. I wish we would have hearings on that because that's a real fact. That’s not a political talking point.

We all know not only did China lie, they corrupted the World Health Organization, and they were perpetuating that as well and made it harder for us. I remember being in a meeting in the white house with Dr. Fauci months ago before it was a global pandemic, and we were talking about the desire to get some of our medical experts into China to find out what was really going on, and they wouldn't let you in.

The Chinese Communist Party wouldn't let you in when President Trump wanted to send medical experts into China before it spread into the United States, and that cost lives. Why aren’t we having a hearing about that?

Scalise detailed the plans that the president released on dealing with the coronavirus, including plans on how to stop the spread within 15 days, then extending that to 30 more days, and eventually on reopening states and leaving it up to governors on when to do that.

Clearly, we talk about some of the other different things that were done to stop the spread. This president actually did develop an early plan called 15 Days to Stop the Spread. It was one of the first real organized plans to encourage states to pull back. It wasn't an easy plan for the president to have to issue, but it was necessary, and in fact, there were meetings in the White House.

I think Dr. Fauci and Dr. Birx were there as that plan was being carried out to that you determined maybe we need to go longer, to go 30 more days and in fact, by going 30 more days, you could save 1 million, maybe 2 million more lives, and then President Trump announced that plan and did save those lives. The Trump administration then released a plan called Guidelines: Opening Up America Again on how states could safely reopen.

That’s this part of the plan, by the way. Maybe some people are so busy reading tweets that they haven't actually read the plan. It's really good guidance issued by some of the most recognized international experts on disease prevention. Some of you here today represent parts of this plan, and so in opening up America again showed how states could safely reopen. The plan was developed by public health experts.

Some complain that President Trump didn't have the power to force states to reopen, so the administration actually released guidelines so that states had discretion. Each state -- we all understand how the 10th amendment works. Each governor is in charge of their state. Nursing homes are actually regulated by the states, not by the federal government, but we give guidance, and it's been really good guidance and in fact, that guidance has saved lives.