Sen. John Kennedy Compares DHS Secretary Saying the Border Is Closed to Clinton Saying, ‘I Did Not Have Sex With That Woman’ 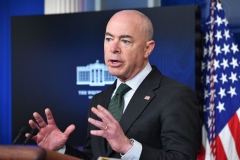 Homeland Security Alejandro Mayorkas holds a press briefing in the Brady Briefing Room of the White House in Washington, DC on May 11, 2021. (Photo by NICHOLAS KAMM/AFP via Getty Images)

(CNSNews.com) – Sen. John Kennedy (R-La.) said Monday that the Biden administration is lying about the border being closed, contrary to video footage of scores of illegal immigrants sneaking into the United States, because they think the American people are “morons.”

“Well the Department of Homeland Security has announced that the border is closed, but they lie like they breathe. I don’t mean to be ugly, but they lie like they breathe. When I heard the secretary say the border is closed, my mind went back to that image of President Clinton looking the American people in the eye and saying, ‘I did not have sex with that woman.’ We know how that turned out,” he told “Fox and Friends.”

“I’ve been to the border. If you believe the border is closed, you believe in the Tooth Fairy, the Easter Bunny and that Jimmy Hoffa died of natural causes. We’ll have 2 million people come into the United States this year illegally thanks to the Biden administration. They have no idea who they are except that they’re coming from all over the world,” the senator said.

“The Biden administration has almost completely halted any kind of deportation of people already here illegally. America has become one giant sanctuary city, and the shame of all this is that in addition to violating the law and being dangerous, it undermines legal immigration. Most Americans support legal immigration. I do. We welcome a million people to come into our country, and we’re happy to have them,” Kennedy said.

The senator said the president has surrounded himself with “extremely radical” people who “believe that vetting people at the border is racist.”

“President Biden has put around him – I know he’s a nice guy. He is a nice guy. I’ve talked to him, but the people he’s put around him are extremely radical. I mean they live in crazy town. They need an exorcist. These folks really believe that vetting people at the border is racist,” Kennedy said.

“They think that unlike any other country in the history of the world we are supposed to just welcome anybody who wants to come in without asking any questions, and the American people don’t support that, and President Biden knows it, so that’s why I say so many of his people lie like they breathe,” he said.

Kennedy said that people like DHS Secretary Alejandro Mayorkas just want to keep their job, so they’re willing to lie to the American people.

“I know the secretary. Look, here’s what D.C. is all about. The thing that most people in Washington, D.C. want is to keep their jobs, and I’m sure the secretary wants to keep his job, and I’m sure he’s been told by the Biden White House to just say, ‘okay. The border’s closed,’ the senator said.

“And so many people around President Biden believe that the American people are morons and that they’ll just believe whatever they see on television, and they’re not morons, and they don’t believe it, because it’s not true. I think they know that, but this just shows you the contempt that so many people in the Biden administration have for the American people,” he said.