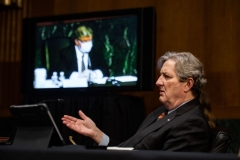 Senator John Kennedy, (R-LA), asks a question during a Senate Banking, Housing, and Urban Affairs Committee nominations hearing on Capitol Hill in Washington, DC on May 5, 2020. (Photo by SALWAN GEORGES/POOL/AFP via Getty Images)

The bill includes money for coronavirus testing, for local and state governments, and direct aid to American taxpayers.

“Well, none of us, Sean, wants anyone to die. I don't think any of us, not those of us in good faith, want to see permanent damage done to our economy. That's why I am so disappointed in Speaker Pelosi's bill. I think it will set us back,” Kennedy said.

“In my opinion, the speaker has moved from folly to farce, and when I saw it, it reminded me of that old Jack Nicholson line: ‘Go sell crazy somewhere else. We’re all stocked up here,’” the senator said.

“It's not a serious or mature effort to legislate. It's dead as fried chicken in the Senate. It’s dead as fried chicken with the American people once they find out what’s in it. She knows that, and everybody who has a brain above a single cell organism knows that. It's just political pageantry, and I'm just very disappointed. It's going to set us back,” he added.

Pelosi’s bill would require the U.S. to borrow $3 trillion that our kids have to pay back, Kennedy said.

Besides rewriting immigration law, releasing federal prisoners, and a federal takeover of state elections, the bill would turn over most public safety decisions to the Occupational Safety Health and Administration (OSHA), the senator said.

“Her bill would rewrite our immigration laws. Her bill would release many federal prisoners. Her bill represents a federal takeover of our state election systems. Her bill would turn over all of our public safety decisions or most of them to OSHA, which will probably promptly require all of us to abide by OSHA rules. I don't want to have to wear a face mask in the shower. That's the sort of stuff that OSHA promulgates every day,” Kennedy said.

“I was hoping for a serious mature, honest effort, but that's not what this represents. It’s just as I said, political pageantry,” the senator said.

“It is repulsive, Senator, that she did it with the first bill. This is now the fifth bill. She wants a trillion taxpayer dollars and every liberal wish list made. Now, your state is fiscally responsible. All the red states are fiscally responsible. I just gave you a small snippet of wasteful spending in New York, New Jersey, oh Illinois, California with their open borders, sanctuary statuses. I don't think your responsible citizens should pay for it,” Hannity said.