Sen. John Kennedy: ‘The Price of Gas Is So High That It Would Be Cheaper to Buy Cocaine and Just Run Everywhere’ 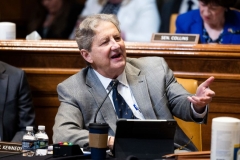 (CNSNews.com) – Sen. John Kennedy (R-La.) told Fox News’ “Jesse Watters Primetime” on Tuesday that Treasury Secretary Janet Yellen admitting she was wrong when she said that inflation was transitory means that she doesn’t have a solution to inflation.

“Jesse, in Washington, D.C., when -- when I feel inadequate, I just look around. On really bad days I see liars and frauds and meat heads in every direction. This is what President Biden's and Vice President Harris' Washington, D.C. has given the American people, and bear with me,” he said.

“Meanwhile, her boss, President Biden, continues to campaign for more economic chaos by trying to convince us in Congress to raise taxes by $3.5 trillion, by expanding an already generous welfare state, and by turning cops into social workers,” the senator said.

“Meanwhile, I don't know about where you live, Jesse, but in my state, the price of gas is so high that it would be cheaper to buy cocaine and just run everywhere, and in the middle of all of murk and mayhem here comes Vice President Harris. She told us she has had an epiphany. She has discovered the root cause of illegal immigration and what we should do about it,” he said.

“She really said that. If the vice president were here right now, I would say respectfully, madam vice president, there is no force in history, none, more powerful than self-delusion. The root cause of illegal immigration is that people are coming into our country illegally and people are coming in to our country illegally, because you and President Biden are letting them in,” the senator said.

“Enforce the law. Do what we were doing the day before you took office, and the American people understand that, and that's why President Biden is about as popular right now as a sinkhole,” he added.