Sen. Joni Ernst: The Quickest Way to Address Impending Worldwide Famine Is for Ukraine to ‘Win This War’ 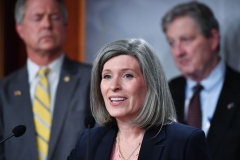 (CNSNews.com) - Sen. Joni Ernst (R-Iowa) warned Thursday that because of Russia’s attacks on Ukraine, which is one of the largest exporters of corn, wheat, and sunflower oil, the world is facing an impending famine.

As CNSNews.com previously reported, Sen. Roger Marshall (R-Kansas) warned that there will be a worldwide famine in two years because of Russia’s invasion into Ukraine.

“Senator Marshall and I did host this meeting yesterday here at the Capitol, and he is absolutely correct. About 40 to 45% of the production in Ukraine will be decreased this year, because of the war and the scarcity of supplies that go into the planting season, and we know that Ukraine also supports about 400 million people around the world with its food products,” Ernst told Fox Business’s “Mornings with Maria Bartiromo.”

“So we do see that we have an impending famine and I’ve heard from David Beasley at the World Food Bank that he's now going to have to take from the hungry to feed the starving,” the senator said.

“The quickest way to address this situation is for Ukraine to actually win this war so that they can get back to whatever normal is after this invasion, but simply supporting them with the lethal aid is a step forward, additional sanctions on Russia a step forward, but then there are ways that we can help provide diesel fuel which is necessary for the planting season in Ukraine because all of their diesel fuel is going towards the war effort,” she said.

“We can assist with other types of planting measures, but there are many things we can do, but bottom line, Maria, Ukraine must win this war and win it quickly,” Ernst said.

“It’s genocide against Ukrainian people and now Putin is using Russian aggression against Ukraine to organize a famine worldwide. Why? Because if Ukraine planting season is at risk it means that people in Middle East, in Africa, in Asia, which depends on Ukrainian food, corn, sunflower, wheat, they will face hunger and there will be a refugee crisis, and this is why I agree with Senator Ernst,” Hopko said.

“The faster we receive weapons, we unblock Ukrainian ports because many American companies, they bought millions of tons of wheat and other agriculture commodities, and now it's stuck in Odessa and other ports of Ukraine, and we need anti-ship weapons and also to demine the Black Sea, which Russia also are doing. They’re creating economic and global food crisis,” she said.

Ernst said that Russia considers “hunger as a weapon.”

“Ukraine is one of the leading countries in the global food market. Without our exports it's not simply a shortage but a threat for famine in more than a dozen countries,” the senator said.

Ernst agreed with Bartiromo that the Biden administration should shift priorities toward getting production facilities back to the United States so we don’t have to rely on foreign countries for food or medicine rather than prioritizing electric vehicles.

“I think this administration has a lot of priorities that are just simply wrong for the American people, and certainly you bring up the electric vehicles. Well, we need to unleash American energy. That's so important. Bring production back to the United States,” the senator said.

“We are very fortunate here in the United States that we are able to produce the food that we need, and that's exactly what Ukraine does as well,” she said.

“It does grow and produce the food it needs, but Ukraine and the United States are very similar in that we export much of what we can grow and produce to those countries that can't produce the types of food products that we do, but you're absolutely correct. This administration has bent to the far left,” Ernst said.

“They are following a deranged climate policy, and because of that, they've lost sight of issues that are important to the American people and certainly going back to lethal aid, we have to make sure that Ukraine wins this war,” the senator said.

Bartiromo asked why Ukraine still doesn’t have all the weapons they need to fight Russia.

“This was a question posed by Dr. Hopko and the group of Ukrainian civil society leaders we met with yesterday, and we are pushing as Congress to make sure that we have the funding for lethal aid, and so there seems to be a slowdown, whether it's through the DoD or NATO partners, but they have asked for the equipment that will help them win this war,” Ernst said.

“I am adamantly in favor of making sure that we are providing everything for the Ukrainian men and women to be victorious,” the senator said.