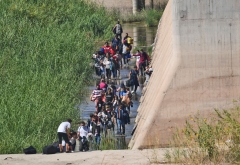 Migrants attempt to cross in to the U.S. from Mexico at the border October 10, 2021 in San Luis, Arizona. (Photo by Nick Ut/Getty Images)

(CNSNews.com) - Sen. Lindsey Graham said Tuesday that the Border Patrol told him during a visit to the border in Yuma, Ariz., that the likelihood of a terrorist attack coming from the southern border is growing daily.

“What I saw that bothers me the most is another 9/11 in the making. There are 80 countries that they’ve picked people up from. There are two terrorists from Yemen that they caught just a few weeks ago. How easy would it be for al Qaeda or ISIS cell to leave out Afghanistan and come through the southern border to blend in with this group that Griff was talking about,” Graham told Fox News’s “Hannity.”

“The Border Patrol is doing the best they can, but they told me that the likelihood of a terrorist attack coming from our southern border grows by the day and what you see in Texas is moving to Arizona. A 1300% increase in illegal crossings in the Yuma sector in the last few months. Why?” the senator said.

DHS Secretary Alejandro Mayorkas announced Tuesday that they will no longer be doing workplace raids for illegal immigrants.

“We changed the Remain in Mexico policy. What Mayorkas did today calling off all the raids of work sites is going to be another incentive for people to come cause the word is out, you come, you claim asylum, you never leave,” Graham said.

“The policy choices of Biden are all over the world now. We had 40,000 Brazilians coming from the Yuma sector alone headed to Connecticut wearing designer clothing Gucci bags. This is not economic migration anymore. People see an open America. They've taken advantage of us. and it won't be long before terrorists get in this crowd,” he said.

Graham said that the Border Patrol wants him to come down every week, “because they finally get someone to help them.”

“The Border Patrol, men and women of the Border Patrol are being asked to do the impossible. They’re American patriots. They deserve all of our appreciation and thanks, but they’ve been abandoned by the Biden administration. There were 5,000 people in the facility made for 500 until I came,” he said.

He said that illegal immigrants are getting preferential treatment, because people traveling into the U.S. from other countries must be vaccinated and have a negative COVID test, unless they cross the southern border.

“If you were really serious about people coming into the country, spreading covid. If you're traveling from Germany to the United States you have to be vaccinated and have a negative test. 114,000 people come into the Yuma sector alone since last October. Nobody's being tested, nobody's being vaccinated. They don't have the capability to do that,” the senator said.