Sen. Lindsey Graham: 'If You Think Growing the IRS Is Good for You, You’re Wrong’ 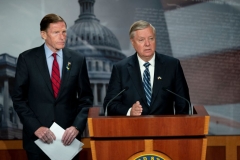 enator Lindsey Graham (R-SC) and Senator Richard Blumenthal (D-CT) speak during a news conference on declaring Russia as a state sponsor of terrorism, at the US Capitol in Washington, DC, on May 10, 2022. (Photo by STEFANI REYNOLDS/AFP via Getty Images)

(CNSNews.com) – Sen. Lindsey Graham (R-S.C.) warned Sunday that the Inflation Reduction Act will mean hiring 86,000 more IRS agents that will come after “waitresses, Uber drivers and everybody else to collect more taxes.”

Sen. Richard Blumenthal (D-Conn.) told CNN’s “State of the Union” on Sunday that “one thing where I think we can agree it will make things better is, the IRS is going to have resources it needs to go after the highest-income Americans that are cheating on their taxes right now, and it will mean more revenue for the government.”

He added that “overwhelmingly, the American people want to cut the cost of prescription drugs. This measure does it through enabling Medicare to do what the VA does, what the Department of Defense does, negotiate for lower price, and that will affect the entire course of inflation.”

However, Graham disputed that, saying, “Well, number one, prescription drugs, this is price-fixing. They take 15 drugs, and they put a limit on what you can charge. That sounds good, until pharmaceutical companies invent less new drugs. Remember COVID? Well, it was the American pharmaceutical industry that got us the drugs that keep us out of the hospital and keep a lot of us alive.

“This is price-fixing. It has never worked for us. It's not going to work now. Hiring 86,000 more IRS agents, if that makes you feel better, you have missed a lot. They're coming after waitresses, Uber drivers and everybody else to collect more taxes. So, if you think growing the IRS is good for you, you're wrong,” he said.

When asked about the Congressional Budget Office’s (CBO) assessment that the bill would reduce the deficit, Graham said prior to the Senate vote, “It says it would reduce the deficit by $100 billion. We're going to spend almost a trillion dollars. The truth is, if the American -- the Obamacare subsidies go away after three years. Well, we all know they're not going to go away. So, if they stayed in place for 10 years, it would add $280 billion to the deficit.

“So it's a gimmick. They have got a gimmick in the bill to limit the subsidies for three years ago that go to people who make $304,000 a year. This thing is going to make everything worse, and not one Republican is going to vote for it,” he added.

Blumenthal said that with the bill not only will Americans see the cost of prescription drugs cut through Medicare negotiations, but “they're going to see energy costs cut because they're going to be receiving credits and rebates for energy saving and cost-cutting measures.”

“And they're going to see greater tax fairness, because corporations that are currently paying nothing will have to pay at least 15 percent. We're talking corporations with assets of more than a billion dollars or earnings of excess in that amount. So, we're going to see cost of gasoline continue to drop, the cost of necessities to decline, and I think Americans will see historic results,” Blumenthal said.

“Well, this is not the bipartisan part of the interview,” Graham said. “So, the American Rescue Plan, remember that one? That was supposed to make us -- make everything better. Well, it became a recession plan. This is going to make everything worse.

“I voted for a bipartisan infrastructure bill, and I voted for gun legislation, and I'm not going to vote for this. The minimum tax of 15 percent destroys expensing. Now, what does that mean?” the senator said.

“If a company buys a piece of equipment, they could expense it under the 2017 tax cut in the same year they bought it. That goes away. So, CBO says it disincentivizes companies for building factories, buying equipment, which would help us get out of recession,” he said.

“There's a 16.4 percent tax on imported barrels of oil that are going to increase cost at the gas pump. Subsidies for Obamacare go to families making $304,000 a year, which I think is ill-conceived, and the bottom line, it's not going to help inflation. It's going to make everything worse,” Graham added.