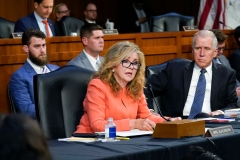 (CNSNews.com) – Sen. Marsha Blackburn (R-Tenn.) said Tuesday that Mexican cartels are actively operating in her home state of Tennessee, despite it not being a border state.

Blackburn said that criminal cartels are in cities that never had a gang presence before, because they’re crossing the southwest border illegally and “spreading out.”

“Why do you have gangs that are now present in cities that had never had a gang presence? It is because they're coming across this border, and they are spreading out,” the senator said.

“We have recently had the Tennessee Bureau of Investigation talk about the cartels being active in Tennessee. Now, we are not on the border, but the problems that are associated with border states and border communities have now migrated to states like Tennessee, and local law enforcement is saying give us the authority to deport these people,” Blackburn said.

The Supreme Court heard arguments Tuesday in United States v. Texas, a challenge to the Biden administration’s decision to prioritize certain the detention and deportation of certain migrants over others.

“Now, in addition to those that are apprehended, you have the known gotaways. You also have the unknown gotaways, and these communities are saying we want to be able to protect ourselves. It is the United States government's responsibility. If they don't do it, we're going to pick up the ball, and we are going to protect ourselves, and they want that ability. Rightfully so,” she said.

Blackburn said that a camp of 2,000 Venezuelan migrants living on the Rio Grande River in Mexico directly across from El Paso, Texas that were seen rioting and assaulting Mexican police who were tring to evict them are headed for the United States.

“They are trying to come here. In this we know that there are people who have criminal backgrounds. We know this. Law enforcement will tell you this, Harris, and they are very concerned, as I said,” the senator said.

“You've got those that are apprehended and you also have the gotaways, the known gotaways, and then the unknown gotaways that are flooding into this country. Local elected officials are saying please help us with this. If you're not going to defend our border, give us the responsibility, let us apprehend, let us deport, let us take care of the people in our communities, and Title 42 ending in December,” she added.

“This is something that people are saying you have to keep this in place,” Blackburn said.