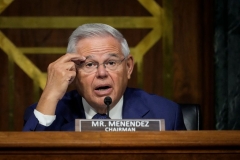 (CNSNews.com) – Sen. Bob Menendez (D-N.J.), who chairs the Senate Foreign Relations Committee, said he’s “disappointed” that Defense Secretary Lloyd Austin chose not to testify at the hearing on the Afghanistan withdrawal, and if Austin chooses not to “avail himself to the committee in the near future,” the senator could consider subpoenaing him and others to testify.

“I'm very disappointed that Secretary Austin declined our request to testify today. A full accounting of the U.S. response to this crisis is not complete without the Pentagon, especially when it comes to understanding the complete collapse of the U.S.-trained and funded Afghan military,” Menendez said in his opening statement.

“His decision not to appear before the committee will affect my personal judgment on the Department of Defense nominees. I expect the secretary will avail himself to the committee in the near future, and if he does not, I may consider the use of committee subpoena power to compel him and others over the course of these last 20 years to testify,” he said.

The senator said that the committee needs to understand why the Afghan government and military “collapsed so precipitously,” which just goes to show that “successive administrations lied” to Congress about “the durability of Afghan military and governing institutions.”

The chaos of last August is due in large part to the February 2020 surrender deal negotiated by President Trump, a deal that was clearly built on a set of lies, a deal that led to the release of 5,000 hardened Taliban fighters boosting the militant group on the battlefield this summer. We know now that the Taliban had no intention of pursuing a political path and peace deal with the Afghan government.

There is no such thing as a reformed Taliban. This group is woefully stuck in the 14th century with no will to come out. Their concept of political representation and legitimacy is based squarely on the use of violent force and intimidation.

The administration says we should judge the Taliban by their actions, and I agree, and their actions since taking over Afghanistan have been pretty horrifying: beating women activists, murdering ethnic and religious minorities …, separating classrooms by gender, shutting down local media, refusal to break with al Qaeda, appointing the head of a foreign terrorist organization that’s designated by our government from the Haqqani network to lead the ministry of interior and the list goes on.

Menendez called for sanctions to be reimposed against the Taliban, and he warned that other countries should not be in a rush to recognize the Taliban.

“With this in mind, the United States and the United Nations should maintain existing sanctions on the Taliban. The U.S. should reimpose those sanctions that were waived during the negotiations process, and the U.S. should consider new measures to impose higher costs on the group and its leaders while insuring that lifesaving humanitarian aid is able to assist those most vulnerable to hunger, disease and disaster,” he said.

“Nor should any country be in a rush to recognize this regime. A minimum of following criteria must be met before recognition is even considered. Absolute repudiation of the Taliban of all cross border terrorism including Al Qaeda and associated groups, equality of rights for girls and women. Protection for minority ethnic and religious, commitment to democratic elections, and ending all narcotics-related activity. So yes, the Taliban now run Afghanistan but that does not mean we ever accept their behavior,” the senator said.

Menendez said that while he supported the decision to withdraw U.S. troops from Afghanistan, he has “long maintained” that how the U.S. left mattered.

Doing the right thing in the wrong way can end up being the wrong thing, and to get this right, the Biden administration needed to answer two fundamental questions. First, would the withdrawal leave a durable political arrangement in its wake? Second, would the U.S. and our allies maintain an ability to collect intelligence and conduct counter terrorism operations in a region still rife with groups seeking to do us harm?

I believe the U.S. fell short on the first measure and time will tell on the second, but the prospects don't look promising. So let me start with some framing questions about the Biden administration's Afghanistan decision making.

Menendez blamed Trump and former Senior Adviser to Trump Stephen Miller of “intentionally block special immigrant visa applicants from being processed, which the senator called “a barbaric and cruel decision, which likely resulted in death for some U.S. partners.”

How did the Biden administration specifically accelerate processing SIVS upon coming into office and third, what was the plan to avoid for deal with the refugee and humanitarian crisis? I suspect you'll address some of the issues. Let me applaud the efforts from the Department of State and Defense on the ground who worked under horrific circumstances.

Their actions in evacuating over 120,000 individuals were nothing short of heroic. These personnel deserve answers. The American public deserves answers and the Afghan people certainly deserve answers. Let me close with three points. First, while communication from the administration has been frequent throughout this crisis, information from state, the Pentagon and White house has often been vague or contradictory.

This was obviously a fluid and difficult situation. Frustration among many members was high, and this has to improve. To put this in context, member frustration came on top of years of stonewalling by the Trump administration and its refusal to engage the Senate on the Taliban negotiations. This is one of the examples why I've been trying to pursue on the case act to understand what are the written agreements that come between an administration and others? Maybe if we had seen all the elements of it we would have been in a better position?