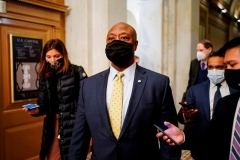 (CNSNews.com) – Sen. Tim Scott (R-S.C.) told CBS’s “Face the Nation” on Sunday that he’s glad to see President Joe Biden, Vice President Kamala Harris, and Rep. Jim Clyburn (D-S.C.) agree with him that America is not a racist country, but the senator says there is “a lingering effect” after centuries of racism and discrimination in the country.

Host John Dickerson asked Scott to reconcile his statement that America is not a racist country with his assertion that “to suggest there aren’t racial challenges and patterns is for someone to be blind.”

“So help people understand when you say it's not a racist country, but then you do talk about a system that targets Black Americans. You've talked about it today, help people square those two statements,” Dickerson said.

“Sure. Actually well, first, let me say thank goodness that finally our president, our vice president and one of the leaders in the Democrat caucus in the House, Jim Clyburn, have all come forward and said exactly what I've been saying for a long time. America is not a racist country,” Scott said.

“The question is, is there a lingering effect after a couple of centuries of racism and discrimination in this nation? The answer is absolutely. The question we should be debating and fighting over is how do we resolve those issues going forward. One side says I'm going to take from some to give to others. Fighting bigotry with bigotry is hypocrisy. It just doesn't work,” the senator said.

“The second-- our side, what I've suggested is let's expand opportunity and make sure that we are fully equipped for the challenges of the future. One of the reasons why we have fought for and won the highest level of funding for historically black colleges, Republicans leading that fight is because I understand that if I can level the playing field in education, we will actually see human flourishing like we've never seen before,” he said.

“We focus our attention in health care as we have on sickle cell anemia or on opportunity zones for bringing resources into poor communities. We'll see what we have seen, which is the unemployment rates hitting all-time lows for African-Americans, Hispanics, 70-year low for women. Those things actually matter, John,” Scott said.

On the issue of police reform, the senator said he’s optimistic about negotiations in Congress. When asked what gives him this optimism, Scott said, “Well, John, let me just say this, one of the reasons why I asked to lead this police reform conversation on my side of the aisle is because I have-- I personally understand the pain of being stopped eighteen times driving while black.

“I also have seen the beauty of when officers go door-to-door with me on Christmas morning delivering presents to kids in the most underserved communities. So I think I bring an equilibrium to the conversation. One of the reasons why I'm hopeful is because in a way, this time my friends on the left aren't looking for the issue,” he said.

“They're looking for a solution, and the things that I offered last year are more popular this year. That gives me reasons to be hopeful, and, frankly, John, I was thinking about this. Think about the parts of the two bills that are in common, data collection,” the senator said.

“I think through negotiations and conversations, we are now closer on no-knock warrants and chokeholds, and there's something called Section 10.33 that has to do with getting government equipment from the military for local police. I think we're making progress there, too,” Scott said.

“So we have literally been able to bring these two bills very close together, and if we remember the goal isn't for Republicans or Democrats to win, but for communities to feel safer and our officers to feel respected. If we can accomplish those two major goals, the rest will be history,” he added.

Scott said that he’s finding support among Democrats on the issue of qualified immunity. The senator wants to allow people to sue the police department, while Democrats want to see people be able to file civil suits against individual officers.

When asked whether he’s finding support among Democrats for his proposal, Scott said, “I am actually, which is another reason why I'm more optimistic this time. What we want to do is make sure that the bad apples are punished, and we've seen that through convictions from Michael Slager in 2015 when he shot Walter Scott in the back and to recently just last several days on the George Floyd convictions.

“So as opposed to having one officer change or not change, we'll have all officers transforming, because the departments are taking on more of that burden, and, frankly, as I spoke with the family members on Thursday. They were very receptive to that proposal, because what they're looking for is something that shows progress. I think that does it,” the senator said.

“When you talk about changing the culture, I wonder what your assessment is of in your own party. How many people think that there is a need for police reform at all? Tucker Carlson is very influential with Republicans, and he quoted you and many others who said after the Chauvin verdict, there's more work to be done. You're talking about changing that culture, and he seemed to think that was not a legitimate position. What's your feeling about that?” Dickerson asked.

“Well, one of the reasons why I started our conversation, John, with reality that as a United States senator, I've been stopped several times in the last three years in the Capitol and on the streets throughout the country. So I'm not having a conversation about some theory or philosophy,” Scott said.

“I'm saying that there is a way for us to restore more confidence from communities of color and say to our officers, we want character-driven officers responding to crises in neighborhoods. Those are two things that we can accomplish. I think my party, significant numbers in my party have already said to me, we will go where you go on this issue as long as I can explain my position, and we're going to do that,” he said.