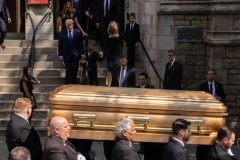 The remains of Ivana Trump are carried out from St Vincent Ferrer Roman Catholic Church during her funeral service in New York, on July 20, 2022. (Photo by YUKI IWAMURA/AFP via Getty Images)

“Dear @FBI, I know u don't need advice from a soap star, but having been in 10 or 10k implausible storylines in my 37 yrs, may I recommend digging up Ivana. Cleary it didn't take 10 pall bearers to carry a liposuctioned 73 yr old who methinks was in her weight in classified docs,” Grahn tweeted on Wednesday.

Grahn has been a frequent outspoken critic of the Trump administration and the Republican Party.

Ivana Trump died in an accident as a result of suffering blunt impact injuries to her torso on July 15 at the age of 73, according to the New York City Office of the Chief Medical Examiner. She was laid to rest at the Trump National Golf Club in Bedminster, N.J.

As CNSNews.com previously reported, former President Trump called the FBI’s raid on his private residence at Mar-a-Lago in Florida on Monday “prosecutorial misconduct, the weaponization of the Justice System, and an attack by Radical Left Democrats who desperately don’t want me to run for President in 2024.”