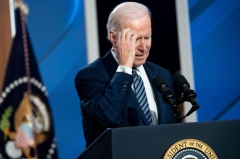 President Joe Biden speaks during the closing remarks of the virtual Summit for Democracy in the Eisenhower Executive Office Building, adjacent to the White House, in Washington, DC, December 10, 2021. (Photo by SAUL LOEB/AFP via Getty Images)

(CNSNews.com) – The State Department announced on Monday that it has “directly assisted” 479 U.S. citizens and 450 lawful permanent residents leave Afghanistan and relocate to the United States since Aug. 31.

However, on August 31, President Biden said that “about 100 to 200 Americans remain in Afghanistan with some intention to leave.”

"Most of those who remain are dual citizens, long-time residents who had earlier decided to stay because of their family roots in Afghanistan,” he said.

When asked why there are still Americans stranded in Afghanistan, White House Press Secretary Jen Psaki said Tuesday, “Well, let me reiterate something that Tony Blinken said back in August, which is that if Americans in Afghanistan wanted to leave, whether it was three weeks from now, a month from now, two months from now - back in August - we would help them get out, and that is something we've delivered on our word on.

“I would note that since that time, we've directly assisted 479 American citizens, 450 lawful permanent residents and SIV holders and SIV applicants to depart Afghanistan. That’s important to convey, because it’s important for people to understand who are there that even if they decided not to, or even if they decided not to today, we’re still going to help them depart and there is evidence of that,” she said.

Fox News White House Correspondent Peter Doocy pointed out that “479 left behind is higher than the 100 to 200 that President Biden was talking about at the end of August.”

PSAKI: 479 we helped depart since August.

DOOCY: Right. He said he thought that there were—we believe there are 100 to 200 with some intention to leave, so how did the number—how’d you guys get the number?

PSAKI: There were people who determined they wanted to leave since then and it is our responsibility to help them depart so that’s evidence of our commitment to do exactly that.

PSAKI: Certainly he receives regular updates from his team, and the State Department and other national security officials literally lead this effort. I would just reiterate that the United States does not track or put a tracker on American citizens traveling overseas. Whether they are in Afghanistan or any country around the world, that would be quite a Fox News story, wouldn’t it be if we did that? We don’t do that, but we do provide a range of services, even when we don't have presence in a country, and our efforts to get American citizens out of Afghanistan - many of them dual citizens, many of them who have lived their whole lives there is evidence of that.