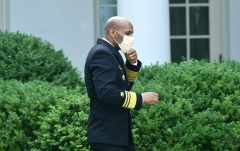 Dr. Jerome Adams, Surgeon General adjusts his face mask after speaking on stage during an event with US President Donald Trump on protecting seniors with diabetes in the Rose Garden of the White House in Washington, DC, on May 26, 2020. (Photo by BRENDAN SMIALOWSKI/AFP via Getty Images)

(CNSNews.com) – U.S. Surgeon General Dr. Jerome Adams said Tuesday that the health disparities in the black community are part of the anger, fear, and frustration manifesting in protests taking place around the country.

Speaking at a White House Coronavirus Task Force press conference at the United States Public Health Service Headquarters in Rockville, Md., Adams said the country can’t “afford to lose focus on the disproportionate impact that COVID-19 has had on vulnerable communities, particularly communities of color.”

“The fact is, this virus is exploiting and exacerbating preexisting health disparities, and these disparate outcomes and equitable opportunities for health are part of the anger, the frustration, and the fear that we’re seeing manifest in protests around the country,” the surgeon general said.

“The fact is, social justice and social injustice often reveals itself through health inequities, and the administration and my office are using our unique levers, including the Public Health Service Commissioned Corps, to ensure that every American has the opportunity to be healthy,” he said.

Adams said the Trump administration has been working to address these health disparities “long before the pandemic.” In response to COVID-19, however, the surgeon general outlined “a number of additional immediate actions” that the administration has taken.

Adm. Brett Giroir, assistant secretary for health at HHS, has led efforts to increase community-based testing to over 600 sites. The surgeon general said that 60 percent of community-based testing sites “are in communities that have a high social vulnerability index, which means they’re disproportionately serving people of color.”

“CDC now requires all testing data reported by states to include information on race, ethnicity, and ZIP Code.  This mandate will help us better understand who is most affected and how to target interventions on the hardest-hit communities. HHS recently allocated $15 billion to Medicaid providers and $10 billion to safety-net hospitals which serve large numbers of our most vulnerable Americans,” Adams said.

“The administration has also invested critical resources in community health centers — which I often say are our best kept secrets — ensuring that 28 million people living in medically underserved areas have access to care and testing that they need.  We don’t want our federally qualified and community health centers to be secrets to the people who most can benefit from the care that they receive there,” he said.

Adams said that HHS Secretary Alex Azar instructed the surgeon general’s office “to expedite calls to action on hypertension — which is the number one risk factor for COVID complications — and maternal mortality, both of which disproportionately impact people of color, and I am very worried about infant mortality and maternal mortality going up in the midst of COVID because women are scared to go out and get care.”

“We need to safely reopen so that people can get the care that they need beyond COVID,” the surgeon general said.

Adams stressed the need for everyone to wear a face covering when out in public, saying that “it adds to your convenience and your freedom, because it allows us to open up more places, and it allows those places to stay open.”

“This mask, this face covering, actually is an instrument of freedom for Americans if we all use it,” he said.

The surgeon general urged young people specifically to wear a face covering, saying it will help life get back to normal so that they’ll be able to attend prom, go on spring break, and attend college football games.

“Young people, I just want to close by asking you to work with us, please. Work with us because I know that many of you feel like you’re not at risk or you’re not as high of a risk, but we need all of you to help protect the most vulnerable, but also to protect yourselves and to give you more options,” Adams said.