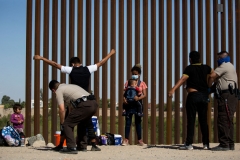 US Border Patrol agents check and search migrants from Guatemala after they turned themselves over to authorities at the US-Mexico border May 12, 2021 in Yuma, Arizona. (Photo by RINGO CHIU/AFP via Getty Images)

(CNSNews.com) – Despite what DHS Secretary Alejandro Mayorkas told Congress on Wednesday, the border is not closed, and there are almost triple the number of illegals coming across the border than there were a year ago, Texas Attorney General Ken Paxton said Thursday.

“You and I were down there a month ago, and I just was in Laredo two days ago. It’s nowhere near closed. The numbers are almost triple those coming across that they were just a year ago. So we know the border is not closed. It is a massive influx of immigrants that have been invited here and really to the benefit of the cartels,” Paxton told Fox Business’s “Mornings with Maria Bartiromo.”

“As you saw, the cartels are the really the only ones absolutely benefiting. They are charging in Laredo actually more than they’re charging where you and I were - about double, about $8,000 per person. The numbers are amazing, and the incentives that Biden is giving the cartels to bring more people, it's just hard to believe,” he said.

The attorney general said that Customs and Border Patrol officers told him it costs $729 per child per day to house unaccompanied minors at the CBP facility in Donna, Texas.

“You may be the only one that’s actually gotten into the Donna facility, the only reporter, and you saw it,” Paxton told host Maria Bartiromo. “We asked the question while I was there, what’s this costing us, and they told us $729 per day per kid. There’s 1500 kids. That’s $400 million just for that one facility.

“I can’t imagine the Ritz-Carlton costing that much, and as you noticed, it wasn't quite the Ritz-Carlton. It was a tent with bunk beds and a few TVs. It’s hard to imagine it cost that much, so I can see why the Biden administration is asking for more money. That’s just one facility,” he said.

“We have them in Texas in Midland. We have them in San Antonio. We have them in Dallas. They’re all over the country, so they need more money. They should be spending money on the border, and yet that's not where the money is going,” the attorney general said.

Paxton said he asked CBP officers where the unaccompanied children are sent to, and they said that 80 percent of them are sent to relatives who live in the United States, but the attorney general doesn’t believe that. He thinks the Biden administration is purposely sending migrant kids to states led by Republican governors so that they will have to cover the costs of taking care of them.

“When we were there together, Maria, I was trying to ask them where do the kids go. They said 80% of them have family members to go with. I don't believe that. That's hard to believe these Central American kids that we saw, 80% of them have relatives here that are close enough to take,” the attorney general said.

“So they are tied to them, which means more crime, but then we also have cost of education, health care, just all kinds of costs to the state that we will not be helped on, and I think that's part of what Biden is trying to do, Paxton added.

The attorney general said if you polled the cartels, “they would be 100% in favor” of Biden’s immigration policy, “because this is economic stimulus – which I know Joe Biden likes, but he’s giving it to the cartels.”

He said he’s “not surprised” that Biden and Vice President Kamala Harris don’t want to go to the border, “because they do not want to highlight what's going on.”

“The policies that Trump implemented - whether it was stay in Mexico, whether it was stop the catch and release, whether it was building the wall - they worked. None of these policies work. They match what Obama did four years ago, and they are unsuccessful, not in terms of actually stopping illegal immigration,” he added.