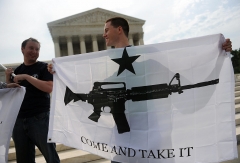 Gun rights activists celebrate the news from US Supreme Court June 26, 2008 that Americans have a constitutional right to bear arms, ending a ban on owning handguns in Washington, DC in its first ruling on gun rights in 70 years. (Photo by TIM SLOAN/AFP via Getty Images)

(CNSNews.com) - Instead of issuing executive orders that infringe on the Second Amendment rights of U.S. citizens, President Joe Biden can tell his executive branch to prosecute gun crimes that have already been sent to the federal government, Texas Gov. Greg Abbott told "Fox News Sunday."

When asked whether there is any gun control that the governor would accept, Abbott said, "Let me mention a couple things. One is I think there is no acceptable way that a president by executive order can infringe upon Second Amendment rights or alter Second Amendment rights. Second, if the president wanted to do something more than show -- if the president really wanted to do something substantively, what he really could do by executive order is to eliminate the backlog of complaints that have already been filed about gun crimes that have taken place.

"You probably know what NICS is, which is the background check organization. Back in 2018 NICS received 122,000 complaints about people providing false information when they tried to buy a gun. They sent those to the ATF. The ATF sent 12,000 -- this is important. They sent 12,000 on two U.S. attorneys. U.S. attorneys prosecuted 12. Here's my point. By executive action, the president could cut down on gun crimes if all he did was to tell his executive branch to start prosecuting the gun crimes that have already been sent to the federal government," he said.

"But governor, the reason he has to go to executive action is because Republicans in Congress will block any legislation. Let's put up the numbers of what we're talking about here. There have already been 10 mass killings by guns already this year, and we are just in April. In each of those cases at least four victims died. Just this week in your state of Bryan, Texas, a gunman killed one person and wounded at least five others. Let's not talk about executive action. Whether it's expanding background checks, whether it is passing red flag laws, is there anything that you would accept?" host Chris Wallace asked.

The governor shared a story about how he visited with the victims and victims' families of the mass shooting in Bryan, Texas, and how they urged Abbott not to allow their Second Amendment rights to be stripped away as a result.

"Well, first, let me tell you about Bryan, Texas, and I'm going to tell you about something that happened in Bryan, Texas, that will answer your question. The shooting in Bryan, Texas, I went to the hospital where victims and their families were the night of the shooting, and we hugged, and we cried, and we talked to them about it. As I was talking to family members of one of the victims, they said governor, please, do not allow this shooting to strip us of our Second Amendment rights, and they explained exactly why," Abbott said.

"They said the Second Amendment is there for the purpose of self-defense, and we need that self-defense now more than ever because of the cartels coming into our state, because of gangs that are operating in neighborhoods, because of the defunding the police that make communities more vulnerable and because of failed policies that released people who are very dangerous criminals back out on the streets," he said.