Texas Gov. Greg Abbott: ‘We Will Have About One Houston Coming Across the Border Every Year’ 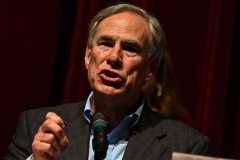 Texas Governor Greg Abbott speaks during a press conference in Uvalde, Texas on May 27, 2022. (Photo by CHANDAN KHANNA/AFP via Getty Images)

(CNSNews.com) - The Supreme Court’s decision that the Biden administration need not comply with the Remain in Mexico policy will result in 18,000 people crossing the border illegally each day and more than 6 million a year, which Texas Gov. Greg Abbott said amounts to the population of Houston, Texas.

“So this is going to be a total disaster. First, it was Texas leading the way in getting court decisions to keep the Remain in Mexico policy and keep the Title 42 policy in place. Obviously, as you point out, the Supreme Court has stricken down the Remain in Mexico policy. Let me just give you the numbers that were provided by the Biden administration,” he told Fox News’s “Sunday Morning Futures.”

“To put this in context, the largest city in the state of Texas is Houston. We will have about one Houston coming across the border in Texas every year. It took more than 100 years to create Houston, now we will be adding a Houston every year. This is outrageous, and there’s a reason Americans are so angry about the Biden administration's approach to the border. Abbott said.

The governor said that Texas is experiencing an invasion led by the Mexican cartels as evidenced by the number of migrants crossing the border into his state.

Listen, these counties are dealing with something that's completely unprecedented. Remember this, it was just two years ago we had the lowest number of people coming across the border and apprehensions under President Trump, and then President Biden took over and eliminated all of the policies that President Trump put in place, and it has led to this unprecedented, overwhelming number of people coming across the border.

You gave some of the numbers. Here's something more important. There's a record number of people coming across the border from more than 150 different countries across the entire globe. We're seeing over the fourth of July, for example, in just the Del Rio sector which is only one of five sectors in the state of Texas, there were about 5,000 people either apprehended or who were gotaways, but it gets worse, Maria, because look at the number of deaths we're dealing with.

You remember what happened in the tractor-trailer trucking where 53 people lost their lives. Things like that happen all of the time, so much so that the United nations declared the border between Texas or the United States and Mexico to be the worst death border and most dangerous border in the entire world, but on top of things hike that, we know about 42 terrorists who have been apprehended coming across the border.

That's not counting the gotaways, and then there's the fentanyl coming across the border. So, yes, we do have an invasion driven by the cartels coming across our border that are pouring people into our country at unprecedented levels.

The governor said that the technical reasons for calling it an invasion lies in the Constitution.

“There are two parts of the U.S. Constitution, article IV, section four, article her section 10. In that executive order that I issued this past week, I referenced both of those, plus I reference a provision of the Texas constitution that also uses the word invasion,” Abbott said.

“The purpose of using those words is it triggers certain additional ways and strategies that states can use their powers to try to protect against actions such as this that are driven by the cartels,” he said.

“One is to arrest them, and we've made tens of thousands of arrests for people and put them in jail, and now we have this new tool where we are now returning them to the border. All of these are completely unprecedented,” the governor said.

“No state in the history of the United States of America has ever done this, and, Maria, that's on top of doing things like Texas being the only state in American history to build our own border wall, Texas being the only state in history where we have laid down mile after mile after mile of razor wire as barriers to prevent people from coming in, so Texas is using every tool and strategy that we can,” he said.

“For one, President Lopez Obrador, he could keep them out of Mexico if he wanted to, but he does not want to. He wants to funnel them into the state of Texas. Maria, can you imagine anything worse in the United States of America than having Lopez Obrador working with Biden, working with Beto O'Rourke - those three with the open border policies?” he said.

“My fellow Americans, it would be a disaster, a crushing disaster from which we may never recover if Beto O'Rourke were working hand in hand with Joe Biden and the president of Mexico on open border policies in the state of Texas. It would destroy our country,” the governor said.

On the Justice Department’s decision to investigate Texas DPS for possible civil rights violations, Abbott said, “I'm a former Texas Supreme Court justice as well as a former Texas attorney general. Everything that we do we make sure is consistent with state and federal law.