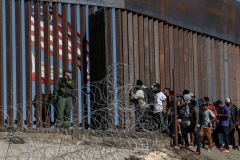 (CNSNews.com) - Texas Lt. Gov. Dan Patrick accused the Biden administration on Thursday of concealing all the information about the border from the public.

“Well first of all, the Biden administration is totally concealing all information coming out from the border, all information. You just cannot get information at the state level or any level. I'm not even sure Joe Biden and Kamala Harris know what's going on, and Henry Cuellar and the Democrats in the valley have been bold and brave talking about this issue,” Patrick told Fox News’s “America’s Newsroom.”

“I've gone to the facility in San Antonio and yes, I walked in one room, and it was empty, but the next room had 1200 kids in it. You can take a photo of an empty room and say no one’s here or take a photo of what’s really happening. They talk about deportations are down, because they’re not sending anyone back. They’re letting everyone stay. The border has never been in worse shape, never more overrun, and America is in trouble with their policy,” he said.

The lieutenant governor warned that the Biden administration is enabling the cartels to force women and children into sex slavery and forced labor.

“You have more criminals in Texas, more criminals coming to states across America because many go through Texas to other states. Bill and Dana, what you have here is Texas, we're spending even more money than our normal $800 million in our budget to try to catch criminals. In the past we would catch them, turn them over. They would be deported,” Patrick said.

“Now we catch them, we turn them over and they let them go. ICE is handcuffed. The Biden administration is putting American lives at risk.and The biggest sin of all is they are enslaving people. We just had the stash house in Houston last week,” the lieutenant governor said.

“We found 90 people living in one house - a lot of women and a lot children in the sex trade, in work slavery because they’re sending money back to the cartels paying part of their fee to get here. So modern-day slavery is taking place at the hands of the Biden administration by enslaving these people to the cartels who come to America to work or are forced into child, sex or women in massage parlors and other places,” he said.

“This is all orchestrated. The Biden administration should know about it. They should stop modern-day slavery that's taking place,” Patrick said.

“We know it’s happening. That stash house is a great example. They’re doing nothing about it, and who is speaking up for them? Republicans and some brave Democrats,” the lieutenant governor added.