Texas Lt. Gov.: SCOTUS Ruling in Biden’s Favor on Remain in Mexico Is ‘Devastating for the United States’ 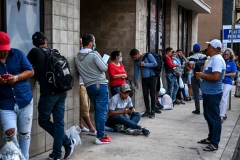 Migrants wait to enter a shelter in San Antonio, Texas on June 29, 2022. (Photo by CHANDAN KHANNA/AFP via Getty Images)

(CNSNews.com) – In a 5 to 4 decision, the Supreme Court on Thursday sided with the Biden administration in Biden v. Texas, allowing the administration to end the Remain in Mexico program also known as Migrant Protection Protocols, which requires migrants to seek asylum from the United States and wait in Mexico while their cases are adjudicated.

Texas Lt. Gov. Dan Patrick said the decision means that by the time that Biden’s term in office is over, the United States will have let in more illegal immigrants during those four years than the population of New York and Los Angeles combined.

Paxton told Fox News’s “America’s Newsroom” that he’s “very disappointed in the decision” and the fact that Roberts and Kavanaugh “sided with the liberals on this.” He called it “devastating for the United States of America” and “a crisis that most people in America really don't have their arms around.”

To put in perspective, under the four years of Biden, based on the numbers we already have seen and the numbers projected over his last 2.5 years, we will have allowed more people into this country illegally that do not share our values and our principles.

They are not highly educated in many areas, that have health issues that impact our entire economy in every state. We are going to see more people here illegally than live in the two largest cities in America – New York and Los Angeles combined or five times the number of people who live in Houston, which is the fourth largest city in the country.

We’ll be approaching 40-50 million people here illegally since the 1990s. And the question that has to be asked, what happens to these people when they get here? They don't just disappear. They do disappear from sight but what do they do? If they go to school, they are three or four grades behind. You can’t put a 15-year-old in the fourth grade, so they drop out of school.

What future do they have? They don't have a work permit. They don't have citizenship. They go to our emergency rooms and clog our hospitals. Fentanyl is pouring across the border with them, because as you crowd people into the border, the drugs come the other direction where Border Patrol are not, and we’re doing everything--- and now that’s the leading cause of death in America for young people 18 to 45, so this is a terrible decision for America.

This is a terrible decision for Texas, and we alone in Texas are spending $4 billion this year in border security. We normally spend about $400 million. A $4 billion. That's more than some states have a total budget. This is only going to allow Biden to thump his chest and say, ‘See, I'm right,’ and the floodgates are going to be open.

People are coming here from 150 countries. One last stat to give you a sense of how big this is in America. The border with Mexico and Texas is longer than the mileage from Atlanta, Georgia, to Maine.

That is about 1100 miles. We have almost 1300 miles of border with Mexico and a zigzag way down the Red River and now the Supreme Court has just opened the doors, but we’re not going to suggest packing the court.

As to what legal recourse Paxton has, he said that they’re “doing everything we can up into the letter of the law.”

We will be coming back into session in January, and it is my intention as lieutenant governor who does control the agenda with the Senate majority in the Texas Senate to pass legislation that we can get back to the Supreme Court like Arizona did, but they lost their case in 2012, to bring a case that says we have to have control over our border, not just the federal government, because it’s impacting the lives of 29 million Texans, and we should have a say in that.

You had an earlier guest talking about going back to states’ rights, and that's what we need, Dana.  My number one responsibility is to the Constitution of Texas and America but to the safety of our citizens and the federal government is allowing people to come into this country, which has a tremendous impact in so many areas on America, but on Texas.

That's my responsibility and I should have a right to protect my citizens and not have the federal government not do their job. Our founders never thought we would have a president this incompetent who would open up the border and allow this invasion.

I don't think our founders ever dreamed that we’d have a president that says, ‘Just come on in, just flood America’ without checking anyone for anything. We don't know who these people are. We don't know where they go, as I said, and they just go into our society.

That's a tremendous burden on the taxpayers and as Henry Cuellar said earlier, those who have actually gone to court, which are very few, 90% of the cases show that they are not here a legal asylum reasons. This was a policy that Trump put into place. It worked, and we had control of the border his last year of the presidency, and in terms of those poor souls in the back of that 18-wheeler. as I said to yesterday - I think when I was with you - it's been a long 24 hours - that no one should have to come to America and die in the back of an 18-wheeler to get here.

We’re going to be on the wall doing everything we can, building the wall, but I'm going to look for a law that we can go back to the Supreme Court and challenge them that the state has to have the permission to protect its citizens when the federal government will not. That's my duty. That's my obligation. I believe that's what Texans and Americans want.