Texas Sheriff: Biden Is Practicing ‘the Most Historically Significant Lack of Enforcement at the U.S. Border Than Any Other Administration’ in History 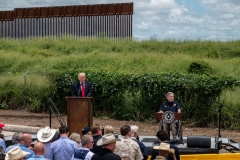 Former US President Donald Trump (L) speaks, flanked by Texas Governor Greg Abbott, during a visit to the border wall near Pharr, Texas on June 30, 2021. (Photo by SERGIO FLORES/AFP via Getty Images)

(CNSNews.com) - “This administration is actually practicing probably the most historically significant lack of enforcement at the U.S. border than any other administration in the history of the United States, Jackson County, Texas, Sheriff Andy Louderback told Fox Business’s “Mornings with Maria Bartiromo” on Tuesday.

“The institutional rot of this administration continues to grow. It's grown at a rate--- obviously, the wonderful men and women of the U.S. Border Patrol, Texas law enforcement, our national Guard troops that have been down here are experiencing all of the effects of Biden administration policies, and they all affect national security, and they all affect every law enforcement agency here in the country,” he said.

“Our crime is up. Our mass chaos is up. All of these things are exponentially increasing. When you have a model of no enforcement,” the sheriff said, adding that “it is absolutely phenomenal the chaos they have created for Americans.”

Bartiromo pointed out that there are 11 National Guard soldiers from outside of Texas left in the Rio Grande Valley, down from nearly 200.

Asked to speculate why, the sheriff said it might be “a move to a permanent majority.”

“These things that for professional law enforcement, we don't understand. These are areas that a secure border is fundamental to having a country and this is not -- this strategic model that they have put in place here today is not anywhere close to that,” Lauderback said.

Bartiromo pointed out that there are $100 million in border wall equipment that was already paid for by U.S. taxpayers is going to waste, because the Biden administration has halted border construction.

“Well, anything to decrease security here in the United States seems to be the objective here. But let's also -- that's the tip of the iceberg. Let's not even talk about Afghanistan -- the billions there that were left there. This administration has committed -- what do you refer to that as, when you leave billions of dollars of equipment everywhere, leaving it sitting out here in the elements day after day and not going to have national security?” Lauderback said.

The sheriff said that the United States is “leaderless” right now.

“Well, we're leaderless at this point in time. So from January 20th on, where we came from a very stable, secure border for the last two years, by January 21st, chaos has descended upon the United States in the form of no enforcement policies here. It's tragic. It's -- you know, I lack the vocabulary really to express what this administration has done to America here and to Texas,” Lauderback said.

When asked what he would like to say to Biden right now, the sheriff said, “You know, there's a lot I'd like to say to our president right now, but I'm afraid that the institutional rot of this administration is going to have to be just replaced.”