Thune: ‘One Important Piece of Infrastructure Is to Finish Building the Border Wall’ 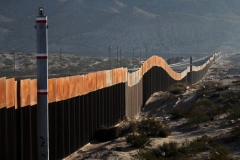 A view of the border wall between Mexico and the United States, in Ciudad Juarez, Chihuahua state, Mexico on January 19, 2018. (Photo by HERIKA MARTINEZ/AFP via Getty Images)

(CNSNews.com) - Sen. John Thune (R-S.D.) drew the connection between the border crisis and the debate over President Joe Biden’s $2 trillion infrastructure bill, saying that “one important piece” to include would be finishing the border wall.

Speaking to reporters on Capitol Hill on Tuesday, Thune talked about the recent congressional trips to the border and how smugglers were being enriched and benefiting from some of the children making the “traumatic journey into this country.”

He said that members of Congress wanted to see the crisis first hand, especially considering that neither Biden nor Vice President Kamala Harris, who was tasked with leading the response to the border crisis, have yet visited the border.

“And the press hasn’t been able to get there to see what’s going on. It is a full-blown crisis at the border, which desperately needs to be addressed, and it is important that the American people know what’s going on there, and I hope the administration will realize the error of their ways in getting away from some of these policies that had worked and been effective in securing the border, and now they’ve got this humanitarian crisis, national security crisis down there, which is desperately in need of a solution,” Thune said.

“We heard from Border Patrol how important the wall is and how critical it is to the security down there. Just one observation about what the leader talked about, and that is the infrastructure bill. It’s absolutely true that there’s bipartisan support in Congress, has been in the past. I’ve been involved in my time in both the House and Senate on the relevant committees in drafting and getting support for infrastructure bills,” the senator said.

“The 2015 Fast Act passed with a big bipartisan majority. I was involved in drafting that. There’s always support for infrastructure as understood by most people - infrastructure physically. I think the American people understand what that is. It’s roads and bridges, ports, waterways,” Thune said.

“If you want to add broadband to that, I think there’s support for adding broadband to it, but the proposal that the administration has put forward spends more on electric vehicles than it does on roads and bridges and ports and waterways and airports combined. Then you add all the stuff they have tried to consider in the definition of infrastructure,” he said.

“It is a massive expansion of government, financed on the backs of the American taxpayers with taxes that will hurt the American economy and cost jobs. We can do this. We can do it the right way, and if the president is sincere about his calls for bipartisanship and unity, then he’ll sit down with Republicans and figure out a way to do something that’s truly, truly infrastructure in the best interest of the American people," the senator added,