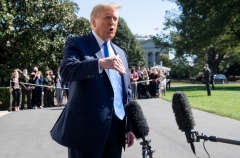 (CNSNews.com) – When a deal is reached on more COVID relief funding, China will pay for it, President Donald Trump said Thursday, adding that he wants to go above $1.8 trillion, but House Speaker Nancy Pelosi (D-Calif.) is standing in the way of that.

In an interview with Fox Business’s “Varney and Company,” Trump said the virus was not caused by “our workers and our people” - it was caused by China, so he’s willing to go higher than the $1.8 trillion offer he made to Pelosi.

“I would, because look, this was not caused by our workers and our people. This was caused by China, and China will pay us back in one form or another, and the money is coming back anyway. I would, absolutely I would. I would pay more. I would go higher. Go big or go home. I said it yesterday, go big or go home, but Nancy Pelosi doesn't want to give anything.

He said he would pick up the phone and call the speaker, but he suggested she has “a lot of mental problems,” so it would be difficult to strike a deal with her.

“Sure I would. I know people, I know she has a lot of mental problems. It will be hard to do anything with her. She wants to wait until after the election. She thinks it hurts the Republicans, and I don't. I think it hurts them,” Trump said.

“We're doing well. I think we'll have a fantastic third quarter. The numbers are gonna come out right before the election, but it is not fair. You look at the airlines. We've got a lot of money sitting here,” he said, adding “All we need is a vote.

“It is not even new money, billions sitting here waiting to go, but she doesn't want to do anything, and [Treasury Secretary] Steve [Mnuchin] has not been successful in convincing her to do it,” the president said.

When asked whether he’d be willing to do a separate stimulus for the airlines, Trump said, “I would like to take the money that's here, and we’re looking at that, take the money we already have, use it in some form not have to go through the craziness of the radical left. We're dealing with radical left people. They’ve lost their minds.”

As to whether he expects to get a stimulus package of any kind before Nov. 3, Trump said, “I think there is a chance. I do. I think there is a lot of pressure on Pelosi. They have a lot of sane people in the Democrat Party, and I really think she is being, she, at some point she might very well tell you, hey look I got to do this. They’ve got a lot of pressure on them. The Republicans are willing to do it.

“I would like to see more money, because it comes back. It will come back anyway. We're going to take it from China. I will tell you right now. It is coming out of China. They're the ones that caused this problem,” the president said.

Host Stuart Varney asked if China is responsible for it, how would the administration get money out of them to compensate for the coronavirus.