Trump: ‘I Think the Public Should Know’ Hundreds Have Been Arrested for Rioting 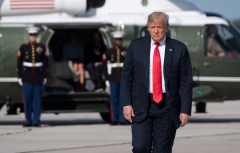 US President Donald Trump walks to board Air Force One prior to departure from Austin Straubel International Airport in Green Bay, Wisconsin, June 25, 2020. (Photo by SAUL LOEB/AFP via Getty Images)

(CNSNews.com) – In a Fox News town hall hosted by Sean Hannity in Green Bay, Wis., President Donald Trump said Thursday that hundreds of people have been arrested for rioting in cities across the U.S., a fact he said that no one is talking about.

“Well, first of all, we have arrested, I think, almost -- but it could be over the number -- hundreds of people.  We have arrested a lot of people for what they've done.  They've created bedlam.  They've destroyed very important things. I mean, you're also talking about statues of George Washington, Abraham Lincoln.  They'd like to get Jesus -- you know that, right? They said, ‘We want to get Jesus,’” he said.

“These are nothing to do with any particular event, other than they're troublemakers or agitators, and they're anarchists.  The big thing they want is they want to really destabilize our country, and we don't let them. So I said to my people, ‘If you've arrested so many, how come we don't know about it?’” the president said.

Trump was referring to the Veterans' Memorial Preservation Act, which states: “Whoever, in a circumstance described in subsection (b), willfully injures or destroys, or attempts to injure or destroy, any structure, plaque, statue, or other monument on public property commemorating the service of any person or persons in the armed forces of the United States shall be fined under this title, imprisoned not more than 10 years, or both.”

“We've got all the tapes -- because the nice part is it's all on television.  Like the character on the horse the other day, he's up there putting on the ropes -- he's in trouble -- on the Andrew Jackson.  Beautiful.  It's beautiful -- right opposite the White House, and you got to remember, Andrew Jackson -- the battle of New Orleans and so much -- he was a very good president,” the president said.

“He was a great general, and you can't let that happen, but they're after Abraham Lincoln, and tonight, I guess, they're looking at Abraham Lincoln, and that was the Emancipation Proclamation.  So you have that, and you're signing Emancipation Proclamation, and you have somebody, I think, that wasn't freed, and he's getting up. It's the position of he’s getting up,” he said.

“He’s being freed by Abraham Lincoln, and I can see controversy, but I can also see beauty in it, and it was paid for by slaves. I don't know if you know that. It was paid for because they were so grateful to the president.  It was paid for that reason, and they want to take it down, and, you know, we can take things down too,” Trump said.

The president said he understands people wanting certain statues taken down, but there should be a legal process they go through first.

“I can understand certain things being taken down, but they ought to go through a process legally, and then we take it down. In some cases, put them in museums or wherever they may go.  But these are really rioters and there are a lot of bad people involved. You know, they talk about protesters -- and there are protesters, but there are beyond protesters, too, and we're not going to allow it,” Trump said.

So we have many, many people under arrest, and we have some just from the other night in Washington, but I'm talking about in other states also,” he said. “Excuse me.  By the way, and Washington is not D.C. -- not a state, because if I say that -- a little statement like that -- sometimes I'll say, ‘Should I correct myself?’ Because the fake news will say, ‘He thought D.C. was a state.’ So I just want to make that clear so they can't do it,” he said.