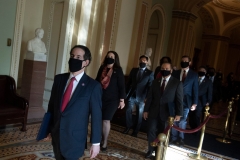 Rep. Jamie Raskin(front) D-MD walks with House impeachment managers to the Senate floor as they arrive for the start of the trial of former US President Donald Trump on Capitol Hill on February 9, 2021, in Washington, DC. (Photo by BRENDAN SMIALOWSKI/AFP via Getty Images)

“House Manager Raskin objected to the certification of President Trump's victory four years ago along with many of his colleagues. You will remember it was Joe Biden who had to gavel them down,” Van Der Veen said.

Van Der Veen argued that Trump’s remarks at the Jan. 6 rally was “far from promoting insurrection against the United States” and instead “explicitly encouraged /those in attendance to exercise their rights peacefully and patriotically.”

Peaceful and patriotic protest is the very antithesis of a violent assault on the nation's capital. The House impeachment articles slanderously alleges that the president intended for the crowd at the ellipse to ‘interfere with the joint session's solemn constitutional duty to certify the results of the 2020 presidential election.’ This is manifestly disproven by the plain text of the remarks.

The president devoted nearly his entire speech to an extended discussion of how legislators should vote on the question at hand.

Instead of expressing a desire that the joint session be prevented from conducting its business, the entire premise of his remarks was that the democratic process would, and should, play out according to the letter of the law, including both the Constitution and the Electoral Count Act.

In the conclusion of his remarks, he then laid out a series of legislative steps that should be taken to improve democratic accountability going forward such as passing universal voter I.D. legislation, banning ballot harvesting, requiring proof of citizenship to vote and turning out strong in the next primaries. These are not the words of someone inciting a violent insurrection.

Not only President Trump's speech on January 6th but indeed his entire challenge to the election results were squarely focused on how the proper civic process could address any concerns through the established legal and constitutional system. The president brought his case before state and federal courts, the U.S. Supreme Court, the state legislatures, the Electoral College and ultimately the U.S. Congress.