Trump to Postal Service: Raise Price of Sending Packages for Amazon or No Bailout 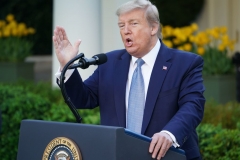 (CNSNews.com) - Treasury Secretary Steven Mnuchin announced Friday that he has been working on getting a loan of over $10 million to help the U.S. Postal Service, but the deal could be scrapped if the postal service doesn’t start charging companies like Amazon four times what it currently charges for sending packages.

President Donald Trump announced on Friday at a signing ceremony for the $484 billion coronavirus relief bill that the postal service charges too little to send packages for companies like Amazon, and unless they increase their prices for these companies - not consumers - he would not sign anything giving the postal service more money, and he would not authorize Mnuchin to do anything.

When asked whether the president supports any money for the postal service, Mnuchin chimed in, saying, “I can comment on that, Mr. President. We authorized in the last CARE Act, over $10 million of a loan. My team has already actively been working on that with the postal service, if they need the money, and we’re dealing with that.”

TRUMP: The postal service is a joke, because they are handing out packages for Amazon and other internet companies, and every time they bring a package, they lose money on it. So, Amazon and other internet companies and delivery companies are dropping all of their -- not all of them, but a big portion of packages and whatever else they are doing into a post office, and the post office is supposed to deliver the packages, and they lose a lot of money.

And if they raised the price of a package, like they should, four or five times, that's what it should be, or let Amazon build their own post office, which would be an impossible thing to do, because the post office is massive and serves every little piece of the country.

MNUCHIN: I do, and, actually, you're going to put certain criteria for our postal reform program as part of the loan. We are looking forward to-- the board is recruiting a new postmaster general and doing postal reform.

TRUMP: I will go a step further. If they don't raise the price of the service they give, which is a tremendous service and they do a great job, and the postal workers are fantastic, but this thing is losing billions of dollars. It has for years, because they don't want to insult, for whatever reason -- you can imagine -- they don't want to insult Amazon and these other groups.