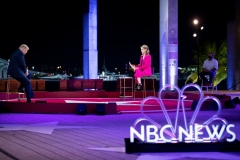 (CNSNews.com) – President Donald Trump said he wants to pass a second stimulus for the American people, but House Speaker Nancy Pelosi (D-Calif.) is standing in the way of that.

At NBC’s town hall on Thursday, a voter asked Trump why he doesn’t use his office to make a second stimulus payment in a separate targeted emergency relief package to help people in the pandemic.

“The problem is she doesn't want to do it because she thinks it's bad for her election. The fact is, she's wrong, because people know, she's in our way. She's not approving it. She doesn't appreciate our people, and she doesn't appreciate at all our workers. Nancy Pelosi, we are ready to sign and pass stimulus,” he said before being interrupted by NBC’s Savannah Guthrie.

“People do not love the back and forth of Washington, but this has been a roller coaster. Back in early October, you one day tweeted, no more negotiations until after Election Day. I'm walking away. Then I think the next couple of days you said maybe we can do something targeted,” Guthrie said.

GUTHRIE: Then you said I want a big, big bill, but then Senate Republicans said no, we're not for that. So you're the big deal maker. How come this is so -- you yourself changed your positions.

TRUMP: Did you ever hear of a word called negotiation? We're negotiating, okay?

GUTHRIE: But people's lives are hanging in the balance.

TRUMP: You know what, and you know who I'm negotiating against? Nancy Pelosi, because she doesn't want to give the money. We should have stimulus. This is not our people's fault, this was China's fault and she's penalizing our people. I'm ready to sign a big, beautiful stimulus. You saw the other day, I say, go big other go home, right? I want it to be big, I want it to be bold. I want it to go directly to the people.

GUTHRIE: Senate Republicans, are they with you? Will they go for big, bold numbers?

GUTHRIE: So far they have not.

TRUMP: I haven't asked them to, because I can't get through Nancy Pelosi. Nancy Pelosi and I, through my representatives or directly, I don't care, if we agree to something, the Republicans will agree to it.