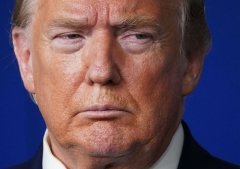 (CNSNews.com) - The United States is exploring options on how to hold China responsible for the coronavirus, President Donald Trump said Monday.

“There are a lot of ways you can hold them accountable. We are doing very serious investigations, as you probably know, and we are not happy with China. We are not happy with that whole situation, because we believe it could have been stopped at the source,” Trump said at a press briefing in the White House Rose Garden.

“It could have been stopped quickly, and it wouldn't have spread all over the world, and we think that should not have happened. We will let you know what the appropriate time, but we are doing serious investigations,” he said.

Trump said he’s also had discussions on the issue of Americans being dependent on China for their supply chain.

“Well, we've already discussed that, and especially having to do with medical supplies and others. If you looked prior to this virus, the deficit was coming way down under my administration, because I put massive tariffs on China. We took in tens of billions of dollars, gave some of it to the farmers who were unfairly targeted by China. Nobody has ever done that before. We never took in 10 cents from China,” the president said.

“Now, all of a sudden, I think you know very well that we've taken in tens of billions of dollars. I helped the farmers by giving them two years ago $12 billion all coming from China, and we have plenty left over too, and then the following year $16 billion and this year, we’re also going to help our farmers,” he said.

“But nobody's ever done a thing like that, because they were targeted unfairly by China. So, we are doing a very strong investigation, and we'll let you know what the result of that is. We should be able to get the answers,” Trump said.

The president said his administration is looking at ways to make China pay, and it would be for more money than what Germany is considering.

“We can do something much easier than that. We have ways of doing things a lot easier than that, but Germany is looking at things, and we are looking at things, and we are talking about a lot more money than Germany is talking about. We haven’t determined the final amount yet. It’s very substantial. If you look at the world. I mean, this is worldwide damage. This is damage to the U.S., but this is damage to the world,” the president said.