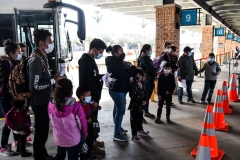 Migrants mostly from Central America are dropped off by the US Customs and Border Protection at a bus station near the Gateway International Bridge, between the cities of Brownsville, Texas, and Matamoros, Mexico, on March 15, 2021, in Brownsville, Texas. (Photo by CHANDAN KHANNA/AFP via Getty Images)

“My policies were working better than they have ever seen on the southern border. The wall is almost complete. We just had to fix little sections, complete little sections that had to be together. We needed them in order to get the trucks back and forth from side to side, but they have chosen to stop right in the middle,” Trump told “Fox News Primetime.”

“They could have it finished in a month, and it would be just magnificent. It already is magnificent when it’s done in the areas where it is totally completed, but just small sections are remaining, and they should finish it,” the former president said.

“They are destroying our country. People are coming in by the hundreds of thousands. Young children are coming in, and they leave their homes, and they come up, because they think it is going to be so wonderful, and frankly, our country can't handle it. It is a crisis like we have rarely had and certainly we’ve never had on the border, but it is going to get much worse,” he said.

“I mean what we are seeing is bad record numbers. It is going to get much, much worse. With a little bit of time, you will see those numbers expand at a level like you’ve never seen before,” Trump said.

When asked if there’s a way to reverse the damage done by the Biden administration, which rescinded Trump’s Remain in Mexico policy, which required migrants to apply for asylum in Mexico, Trump said he has “great respect” for Mexican President Andrés Manuel López Obrador.

They were stopping them so they want to come through Mexico, and we had it really down to a good system, and as the wall was finished, they could remove soldiers, but they still have the same 28,000 and we had a great relationship.

They understood that I was playing with tariffs if they didn’t do that, but we never had to do that to Mexico because the relationship that we developed was very, very good, very close, and we stopped what was coming into Mexico at their northern border. They stopped that, and they stopped it at our southern border. So we had very few people coming in, and we also stopped human trafficking.