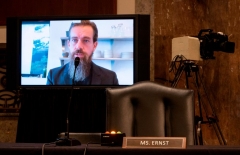 Jack Dorsey, Chief Executive Officer of Twitter, testifies remotely during the Senate Judiciary Committee hearing on 'Breaking the News: Censorship, Suppression, and the 2020 Election' on Capitol Hill on November 17, 2020 in Washington, DC. (Photo by BILL CLARK/POOL/AFP via Getty Images)

After further reviewing its decision, within 24 hours, the social media platform notified the newspaper that it made an error and instructed them on “how to unlock their account by deleting the original violating tweet” and posting it again, but the New York Post wanted Twitter to instead reverse its enforcement action.

In his opening statement at the Senate Judiciary Committee hearing titled, “Breaking the News: Censorship, Suppression and the 2020 Election,” Dorsey thanked the committee “for the opportunity to speak with the American people about Twitter and your concerns around censorship and suppression of a specific news article and generally what we saw in the 2020 U.S. elections conversation.”

We were called here today because of an enforcement decision we made against the ‘New York Post’ based on a policy we created in 2018 to prevent Twitter from being used to spread hacked materials. This resulted in us blocking people from sharing the ‘New York Post’ article publicly or privately.

We made a quick interpretation using no other evidence that the materials in the article were obtained through hacking and according to our policy, we blocked them from being spread. Upon further consideration, we admitted this action was wrong and corrected it within 24 hours.

We informed the ‘New York Post’ of our error and policy update and how to unlock their account by deleting the original violating tweet, which freed them to tweet the exact same content and news article again. They chose not to, instead insisting we reverse our enforcement action. We did not have a practice around retroactively overturning prior enforcements.

The system demonstrated that we needed one, and so we created one that we believe is fair and appropriate. I hope this illustrates the rationale behind our actions and demonstrates our ability to take feedback, admit mistakes and make changes all transparently to the public. We acknowledge there are still concerns around how we moderate content and specifically our use of section 230.

Three weeks ago, we proposed three solutions to address the concerns raised, and they all focused on services that decided to moderate or remove content.

It could be expansions to Section 230, new legislative frameworks or a commitment to industry-wide self-regulation best practices, requiring one, moderation process and practices to be published, two, a straight forward process to appeal decisions, and three, best efforts around algorithm choice are suggestions to address the concerns we all have going forward, and they’re all achievable in short order.

It’s critical as we consider these solutions we optimize for new start-ups and independent developers. Doing so ensures a level playing field that increases the probability of competing ideas to help solve problems going forward. We must entrench the largest companies any further. Finally, before I close I wanted to share some reflections on what we saw during the U.S. presidential election.

We focused on addressing attempts to undermine civic integrity, providing informative context and product changes to encourage greater conversation. We updated our civic integrity policy to address misleading or disputed information that undermines confidence in the election, causes voter intimidation or suppression or confusion about how to vote or misrepresents affiliation or election outcomes.

More than a year ago, the public asked us to offer additional context to help make potentially misleading information more apparent. We did exactly that, applying labels to over 300,000 tweets from October 27th to November 11th, which represented about 2.2% of all U.S. election-related tweets.

We also changed how our product works in order to help increase context and encourage more thoughtful consideration before tweets are shared broadly. We're continuing to assess the impact of these product changes to inform our long-term roadmap.