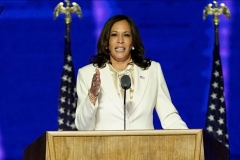 Vice President-elect Kamala Harris delivers remarks in Wilmington, Delaware, on November 7, 2020, after being declared the winners of the presidential election. (Photo by ANDREW HARNIK/POOL/AFP via Getty Images)

(CNSNews.com) - Vice President Kamala Harris plans to visit the U.S.-Mexico border on Friday along with DHS Secretary Alejandro Mayorkas one week before former President Donald Trump’s planned visit, but no details have been released yet on whether she will visit any Border Patrol facilities during her visit.

When asked Wednesday whether it was important to have Harris visit the border before Trump does, White House Press Secretary Jen Psaki said, “We made an assessment within our government about when it was an appropriate time for her to go to the border.”

NBC News White House Correspondent Kelly O’Donnell asked the press secretary, “Would you concede there is a political calculation to having the vice president visit the border before Donald Trump goes and with a drum beat from Republicans who have counted the days that she has not visited the border. Isn’t there a political decision in the timing of this?”

Fox News White House Correspondent Peter Doocy asked, “Why is the vice president visiting the border this week when earlier this month, she dismissed a trip like that, saying it would be a grand gesture?”

PSAKI: She also said in an interview with NBC that she would be open to going to the border if it was an appropriate time. She said that after she said that so it’s an important context.

PSAKI: And again Peter, I think she also said in the same interview that she would be open to going to the border at an appropriate time, and what I’m conveying to you is that while as a part of her assignment, she has of course hosted a number of bilateral engagements. She’s visited the Northern Triangle.

She’s made a number of announcements about how to address root causes that she was going to assess with the Department of Homeland Security and with the administration on when it was the appropriate time to go, and I will note that we’re at this point in part because we’ve made a great deal of progress, and if you look just to a couple of months ago when 6,000 children were in Border Patrol facilities, we’re now at the point where there’s far less than 1,000.

If you look to just a couple of months ago when there were children who are waiting in Border Patrol facilities for more than 100 hours, and they were certainly overcrowded, now it’s less than 30 hours. In April, there were 2200 kids in HHS facilities, and now that number is 14,000. Is there still more work to do? Absolutely. That’s the purview of Secretary Mayorkas but it’s important every component of our government is coordinated.