WH: Biden ‘Happy to Deal to Talk to Anyone’ Who Wants to Deal with Debt Limit ‘in a Responsible Way’ 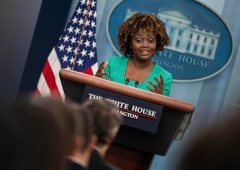 (CNSNews.com) - The White House said Monday that President Biden is “happy to talk to anyone” about the debt limit who wants to deal with it in “a responsible way,” but Congress should not be taking “key programs” like Social Security and Medicare in “a hostage situation.”

“On the debt limit, Senator Manchin, I think today, called the White House position on the negotiations, quote, ‘not responsible,’ and yesterday, I think he called it a ‘mistake.’ I understand what your position is. Is there any concern that Democrats not siding with that position could undercut the effort you guys are trying to put into place over the next four months?”

“So, just let me — look, lowering the deficit has always been a top priority when it — for this President. As you know, he’s lowered the deficit in record fashion at $1.7 trillion under his presidency, and he has said — he’s always said he is happy to talk to anyone who wants to deal with — with that in a responsible way, but preventing default is a separate matter,” White House Press Secretary Karine Jean-Pierre said.

“That is a separate matter within itself. It is a basic responsibility for Congress. We’ve said this over and over and again, and I’ll continue to say this, and it’s the responsibility that they — that Congress has to the American people, and so, it must be done without conditions, even — even as they’ve pushed for tax giveaways to the rich,” she said.

“So, President Biden will never — will never allow Republicans to cut benefits that our hard-working Americans have earned. This is what they have earned. So — but I’ll also note, as it relates to Senator Manchin and to your question, Phil,” Jean-Pierre said.

REPORTER: Are you actively asking Democrats not to break ranks on this issue?

REPORTER: Do not form groups.  Don’t start meeting with people —

JEAN-PIERRE:  I mean, look, we’ve been very public about this.  You guys have all covered what we have said from here about how we see this process moving forward, that it should be done without conditions. This is something that has been done 78 times, when we’re talking about lifting the debt ceiling, since 1960, I believe. This is not unusual.

It was done three times in the past — in the past administration, under Donald Trump. So, this is nothing unusual.  This is something that should be done without conditions, and we should not be taking hostage key programs that that the American people really earned and care about.

Social Security, Medicare — it should not be put into a hostage situation, and again, the president is going to continue to fight for — for those programs, and we’re going to be very clear about how we see how Congress should move forward.