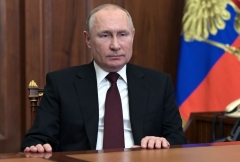 Russian President Vladimir Putin speaks during his address to the nation at the Kremlin in Moscow on February 21, 2022. (Photo by ALEXEY NIKOLSKY/Sputnik/AFP via Getty Images)

“That is not the position of the United States government and certainly not a statement you’d hear come from the mouth of anybody working in this administration,” White House Press Secretary Jen Psaki said Friday.

“Chernobyl was an accident. This is an act of war. This is a war crime unfolding in front of us. So here's the state of play. If Joe Manchin's bill were put on the floor of the United States Senate banning Russian oil coming into the United States, increasing American production to make up for the shortfall, it would get 75 votes,” he said.

“Here's the problem. The Biden administration is to the left of the German Green Party and to the left of Nancy Pelosi. That's our basic problem. You can talk about this until you fall over,” Graham said.

“Here's the problem. They didn't do this on Trump's watch - Russia - because Trump would have kicked their ass. What happened is that Putin looks at Biden, he sized him up. He thinks he can get away with it and he's going to keep going and going and going and nobody in the west is going to stop him,” the senator said.