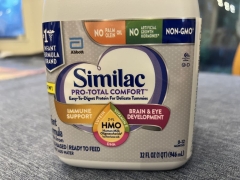 (CNSNews.com) – The White House said Monday that the Food and Drug Administration (FDA) is making it a priority to ensure the availability of infant baby formula despite shortages that led retailers to limit the amount that parents can buy.

The USA Today reports that nearly 40 percent of popular baby formula brands were sold out at retailers nationwide beginning April 24, according to an analysis of Datasembly, which assessed supplies at more than 11,000 stores.

That’s due in part to a nationwide recall in February by Abbott Nutrition, which affects Similac, Similac Alimentum and Elecare, because four babies developed a bacterial infection after drinking the formulas.

“There is growing concern about a persistent supply issue with infant baby formula. There’s about 40 percent shortage right now. Major retailers having to limit how much people can buy — especially acute in places like Tennessee, Missouri, Iowa. This is partly an FDA issue, but it could be a Biden administration issue. I’m just wondering if you guys are planning on taking any steps to help remedy that,” CBS White House Correspondent Ed O'Keefe asked.

“Well, let me first say, as you know, but — the FDA issued a recall to ensure that they are meeting their obligation to protect the health of Americans, including babies — who, of course, were receiving — or taking this formula — and ensure safe products are available. That’s their job,” White House Press Secretary Jen Psaki said.

“Ensuring the availability of these products is also a priority for the FDA, and they are working around the clock to address any possible shortage,” the press secretary said.

“Okay, so what the FDA is doing — which, while they are independent, they are part of the administration — is taking a number of steps to address,” she said.

“That includes working with major infant formula manufacturers to ensure they’re increasing production, because part of this issue is, of course, making sure there is stock on the shelves — right? — and working with the industry right now to optimize their supply lines, product sizes to increase capacity, and prioritizing product lines that are of greatest needs,” Psaki said.

“Because, obviously, as someone who — my child has long been out of formula, fortunately, but it’s close enough that I remember when you were trying to go to the store and get the specific kind of formula for your age child or whatever their needs are. So they are — they are taking steps with that in mind,” the press secretary said.

“They’re also exercising flexibility and expediting review of notifications of manufacturing changes that will help increase supply, particularly in the case of specialized formula — so that applies to that as well — for medical needs, and they’re also trying to streamline import entry review process — processes for already-notified infant formula products coming from notified foreign facilities,” she said.

“So what they’re trying to do — in the shorthand of it — is increase supply by working with a range of manufacturers in what their capacity is to ensure that the kinds of formula that is — was recalled is — where they’re able to help ensure it’s on the — on the shelves,” Psaki said.

“It isn’t something that’s kept in a national stockpile — do you know?” O'Keefe asked.

“I don’t believe there’s a national stockpile of baby formula, but the FDA does — it is not just their responsibility, in their view, to ensure that we are meeting our obligations to protect Americans. It is also their obligation to take steps to ensure supply can be met when they take these steps. So that is what they’re very focused on,” Psaki said.