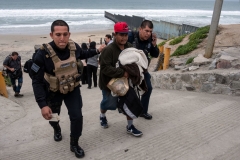 A Central American migrant is taken into custody by Tijuana police after migrants faced US Border Patrol agents while trying to cross the US-Mexico border fence from Tijuana to San Diego, as seen from Playas de Tijuana, in Baja California state, Mexico, on March 21, 2019. (Photo by GUILLERMO ARIAS/AFP via Getty Images)

(CNSNews.com) - The White House confirmed Monday that the Biden administration has been in discussions with the governments of Mexico, Honduras, and Guatemala and has received commitments to maintain a troop presence at the border to help with the border surge.

“There have been a series of bilateral discussions between our leadership and the regional governments of Mexico, Honduras, and Guatemala. Through those discussions, there was a commitment as you mentioned to increase border security, so Mexico made the decision to maintain 10,000 troops at its southern border, resulting in twice as many daily migrant interdictions,” White House Press Secretary Jen Psaki said Monday.

When asked whether the agreements were struck recently in the past few weeks, Psaki said, “I think that’s fair to say, but I would also say that often these discussions are ongoing over a period of time and take place at several levels of the government both here and within these countries.”

When asked whether the plan is to apprehend migrants trying to cross the border or as they’re on their way to the U.S., the press secretary directed the reporter to speak with the countries about how they would be implementing the agreement.

“I think the objective is to make it more difficult to make the journey and make crossing the borders more difficult,” Psaki said.