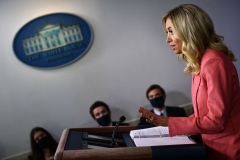 White House Press Secretary Kayleigh McEnany speaks to the press on May 20, 2020, in the Brady Briefing Room of the White House in Washington, DC. (Photo by BRENDAN SMIALOWSKI/AFP via Getty Images)

(CNSNews.com) - Henry Ford Hospital in Detroit, Mich., is doing a study on the use of hydroxychloroquine as a prophylactic among frontline health care workers, White House Press Secretary Kayleigh McEnany said Wednesday.

NBC White House Correspondent Kristen Welker asked for reaction to the American Nurses Association’s statement that contradicts President Donald Trump’s assertion that “many or thousands of frontline workers are using the drug as a prophylactic: "The American Nurses Association has not received reports from nurses or other frontline healthcare workers utilizing Hydroxychloroquine as a preventative treatment for COVID-19."

“Well, there is -- Henry Ford Hospital is doing a study on this now where 3,000 frontline workers will be taking hydroxychloroquine to look at its use as a prophylactic. I believe there is a few hundred or 190 workers in Tampa General Hospital,” McEnany said.

“So this is being used by some, and one thing I want to note with regard to hydroxychloroquine, because I think it's very important that we're as accurate as we can be with our reporting on this: Hydroxychloroquine has been a drug that has been in use for 65 years for lupus, arthritis, and malaria. It has a very good safety profile, but as with any drug and as with any prescription, it should be given by a doctor to a patient in that context,” she said.

“So no one should be taking this without a prescription from their doctor, but that being said, I've seen a lot of apoplectic coverage of hydroxychloroquine,” the press secretary said.

“You had Jimmy Kimmel saying the President is, quote, ‘trying to kill himself by taking it.’ You had Joe Scarborough saying, quote, ‘This will kill you.’ Neil Cavuto saying, ‘What have you got to lose?  One thing you have to lose are lives.’ And you had Chris Cuomo saying, ‘The president knows that hydroxychloroquine is not supported by science. He knows it has been flagged by his own people and he’s using it,’” McEnany said.

“Well, Cuomo mocked the president for this, and interestingly, I found this out just before coming here: Hydroxychloroquine, of course, is an FDA-approved medication with a long-proven track record for safety. And it turns out that Chris Cuomo took a less safe version of it called quinine, which the FDA removed from the market in 2006 because of its serious side effects, including death. So, really interesting to have that criticism of the president,” the press secretary said.

“And on that note to Chris Cuomo, I'd like to redirect him to his brother, the governor of New York, Governor Cuomo, who has several on-the-record statements about hydroxychloroquine, saying, ‘I'm an optimist. I'm hopeful about the drug, and that’s why we'll try it here in New York as soon as we get it. There has been anecdotal evidence that it's promising. That's why we're going ahead,’ she said.

“And I have about eight other quotes from Governor Cuomo should any of you have interest in that,” the press secretary said.

“What you just cited are studies though. There are trials that are in their early phases. Do you have any evidence that thousands of frontline workers are currently using it because they believe it actually will prevent them from getting COVID-19?” Welker asked.

“So the FDA -- the FDA has approved this for off-label use. You know, this president is a big believer in right to try legislation, people who are on their last --” McEnany said.

“But any proof of thousands of workers using it?” Welker asked.

“There are several studies that have been brought up, that the president has actually mentioned, that I'd refer you to. There was one out of France -- a French study involving more than 1,000 patients that found that the vast majority had, quote, ‘good clinical outcomes,’ and by the vast majority, that was more than 90 percent,” McEnany said.

“There was an Italian study of more than 65,000 patients that demonstrated only 20 tested positive of those who are taking it prophylactically and a South Korea study, as well. So there are several studies,” the press secretary said.

“And if you're someone out there -- and this is a safe drug to use -- and your doctor -- importantly to underscore that -- and your doctor prescribes it for your use as a prophylaxis or after coming into contact with COVID, then it's something you should take if it's prescribed by the doctor and that's your personal medical choice,” she added.