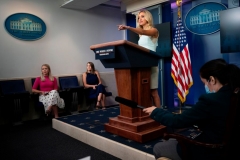 (CNSNews.com) – White House Press Secretary Kayleigh McEnany blasted reporters on Monday for not asking about the shootings that took place over the weekend in cities like New York City, Atlanta and Chicago.

McEnany ended the White House press briefing, by saying, “You know, I was asked probably 12 questions about the Confederate flag. This president is focused on action, and I’m a little dismayed that I didn’t receive one question on the deaths that we got in this country this weekend.

“And I’ll leave you with this remark by a dad — it broke my heart — a dad of an eight-year-old lost in Atlanta this weekend: ‘They say black lives matter…you killed a child. She didn’t do nothing to nobody,’ was his quote,” the press secretary said.

“We need to be focused on securing our streets, making sure no lives are lost because all black lives matter— that of David Dorn and that of this eight-year-old girl,” she said.

As CNSNews.com previously reported, eight-year-old Secoriea Turner was gunned down in the care with her parents at the Wendy’s where police shot and killed Rashard Brooks on June 12.

McEnany was also referring to an uptick in violence in New York City in the wake of the protests.

In Chicago, 87 people were shot – 17 of them fatally, including a 7-year-old girl named Natalie Wallace, a local ABC affiliate in Chicago reported.

In New York City, at least 11 people were killed in roughly 50 shootings across all five boroughs, according to police, a local ABC affiliate in New York City reported.