WH on NY Nursing Home Deaths: ‘Any Investigation Would Be Led’ by DOJ 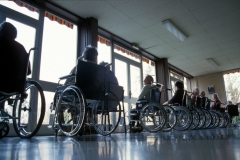 (CNSNews.com) – White House Press Secretary Jen Psaki would not say whether President Joe Biden would support a federal probe into COVID-19 nursing home deaths in New York, saying instead that that falls under the purview of the Justice Department.

During the White House press briefing, Fox News White House correspondent Kristen Fisher asked Psaki about a report by the New York attorney general, which was released on Thursday, that found the state had undercounted the number of COVID deaths at nursing homes by as much as 50 percent.

When asked whether Biden would support a federal investigation into what happened and New York Gov. Andrew Cuomo’s role, Psaki said, “I've seen those reports. I would say any investigation I would point to the Department of Justice.”

As to whether the White House thinks it should be looked into further, Psaki said, “Again, any investigation would be led by the Department of Justice. We’re in a new age where they're independent, and they'll determine what paths they take moving forward.”

“As the pandemic and our investigations continue, it is imperative that we understand why the residents of nursing homes in New York unnecessarily suffered at such an alarming rate,” Attorney General James said in a statement.

“While we cannot bring back the individuals we lost to this crisis, this report seeks to offer transparency that the public deserves and to spur increased action to protect our most vulnerable residents. Nursing homes residents and workers deserve to live and work in safe environments, and I will continue to work hard to safeguard this basic right during this precarious time,” James added.

According to a press release by the New York attorney general’s office, “due to recent changes in state law, it remains unclear to what extent facilities or individuals can be held accountable if found to have failed to appropriately protect the residents in their care.”

“While it is reasonable to provide some protections for health care workers making impossible health care decisions in good faith during an unprecedented public health crisis, it would not be appropriate or just for nursing homes owners to interpret this action as providing blanket immunity for causing harm to residents. In order to ensure no one can evade potential accountability, Attorney General James recommends eliminating these newly enacted immunity provisions.