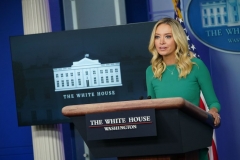 White House Press Secretary Kayleigh McEnany speaks during a press briefing on November 20, 2020, in the Brady Briefing Room of the White House in Washington, DC. (Photo by MANDEL NGAN/AFP via Getty Images)

(CNSNews.com) – White House Press Secretary Kayleigh McEnany said Friday that the White House is not concerned that a lack of working with former Vice President Joe Biden will result in a slowdown of COVID-19 vaccine distribution.

“Yeah, I'm glad you asked that question.  It's an important one, and not in the slightest because, in fact, I did hear the former Vice President say yesterday he was concerned about not being able to distribute a vaccine. He shouldn't be,” McEnany said at a White House press briefing.

“Maybe he hasn't seen, but we have publicly available that plan that I mentioned in my opening. It's the COVID-19 Vaccination Program, the Interim Playbook for Jurisdiction Operations. This is publicly available, if the former vice president would like to read through it,” she said.

“Beyond that, I would say that we've already, going back months, partnered with the 64 jurisdictions in this country to make sure that they each had individualized distribution plans. Those have been assessed.  Those have been made certain that they're -- they're good and operational. So this work has been ongoing,” McEnany said.

“There's a distribution plan in place, which is why you heard General Perna say yesterday that, within 24 hours of getting that EUA, the emergency use authorization, we will be able to distribute this all across the country,” the press secretary said.

At the beginning of the press conference, McEnany outlined the administration’s efforts to get a coronavirus vaccine to the public.

“The beginning of the end of the pandemic started with the leadership of President Trump.  In recent days, Pfizer and Moderna reported the highly successful results of their vaccine development, each achieving a COVID vaccine that is over 90 percent effective. We know Moderna is 94.5 percent effective; Pfizer 95 percent. That is extraordinary,” she said.

“In July, the Trump administration, as part of Operation Warp Speed, agreed to provide Pfizer with $1.95 billion to manufacture and distribute their COVID vaccine, allowing this vaccine to be provided free for the American people,” the press secretary said.

McEnany said that while Democrats were pursuing impeachment of the president, the administration with the NIH were partnering with Moderna to get a vaccine to the public.

While Democrats were pursuing a highly divisive and entirely baseless impeachment endeavor, as far back as January 13th, this President, the Trump administration, and the National Institute of Health was partnering with Moderna and working on this vaccine for the American people, but that's not all. This administration has remained engaged on the development and distribution of a safe and effective vaccine throughout the year.  It began in January and continued thereafter.

On May 15th, Operation Warp Speed was launched. On September 16th, we released two documents outlining a strategy to deliver a safe and effective vaccine.  These documents were the strategic -- strategic distribution overview in the Interim Playbook for state, tribal, territorial, and local health programs and partners. On September 23rd, we provided $200 million to jurisdictions to support plans for eventual distribution.

On October 14th, we provided $31 million to Cytiva for vaccine-related consumable products. On October 16th, we made agreements with CVS and Walgreens to administer vaccines to residents of long-term care facilities. On October 21st, under the PREP Act, we issued guidance authorizing qualified pharmacy technicians to administer the vaccine.

On October 30th, we announced that McKesson Corporation will produce, store, and distribute vaccine ancillary supply kits on behalf of the Strategic National Stockpile to help healthcare workers who will administer the vaccines, and on November 12th, we announced the partnership with large chain pharmacies and independent regional ones to deliver safe and effective vaccines.

The unprecedented response to this pandemic has already saved many American lives, and as you can see, this timeline was ongoing. This was a long process and one that we are very proud of. Now, with multiple safe and effective vaccines just around the corner, we urge all Americans to wash your hands, socially distance, wear a mask when you cannot do so.