WH Press Secretary Karine Jean-Pierre: ‘The Economy Is in a Better Place Than It Has Been Historically’ 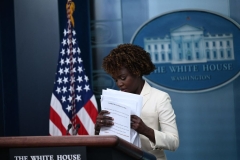 (CNSNews.com) – When asked to comment on recent polling that shows Americans are more pessimistic about being able to achieve the American dream, White House Press Secretary Karine Jean-Pierre said Tuesday that the despite inflation and record high gas prices, the U.S. “economy is in a better place than it has been historically.”

“Why do you think it is that 83 percent of people polled by The Wall Street Journal say the economy is ‘poor’ or ‘not so good’?” Fox News White House Correspondent Peter Doocy asked.

JEAN-PIERRE: So, when it comes to consumer confidence — is what you’re talking about there — we know that can reflect concern and uncertainty about higher prices.
People feel the effect of high prices when they go to the grocery store and they fill up their gans- — gas tank, which the president understands very personally — when he was growing up and understanding how — how when prices elevate even just a bit, how much that can hurt a family, how much that can really affect, you know, someone’s household, but the fact is we are in a fundamentally different place compared to when the president took office and compared to this time a year ago.

And so, you know, during this president — during his pres- — this presidency, people felt uncertainty — uncertain about the economy generally, but they actually felt as good about their personal financial situations as they ever have, according to the Federal Reserve survey, with nearly 80 percent of adults reporting that they are financially comfortable. So, that matters as well.

DOOCY: But to the point about the — you’re saying that people feel good about their personal financial situation. High gas prices, people can’t get baby formula, the supply chain is messed up, everything is more expensive. Where’s the good part?

JEAN-PIERRE:  So, the survey that I just read off started in 2013.  And that is the first time that we saw numbers like this since 2013. So that does — no, that does mean something.  Just like you gave me 83 percent, I’m giving you —

DOOCY: And I understand that. Another number then newer than 2013, 61 percent are saying now, in this Wall Street Journal poll, they are generally pessimistic about people having an opportunity to achieve the American Dream. How’s that going look on a — on a bumper sticker?

We leave that piece to the Federal Reserve. They have the monetary policies to deal with the best — to have the best tools to make sure that we bring down inflation. That’s the — that’s the pain that the American family is feeling, and so, that’s what we’re saying.

We’re trying to — what we’re saying is that we were in a different place a year ago, and now we are in a much better place economically.  But there’s still work to do, and we understand that.

DOOCY: And isn’t it the president’s job to protect Americans from global challenges?

JEAN-PIERRE:  He’s doing — he’s doing his part in trying to make sure that we — the American people feel the impact less, but here’s the thing, and we’ve talked about this: Since Russia invaded Ukraine, we have seen gas prices — these are the facts — go up by $1.51.

We have seen food prices go up because of what — of what Ukraine and Russia represent when it comes to wheat and corn. This is just a fact. This is what we have seen for the past several months. The president has done — he’s tapped into the Strategic Petroleum Reserve in a historic way with a million — a million barrels of oil a month for six months. We did — we made the announcement of the E15, the homegrown biofuels that is going to help families in the Midwest.