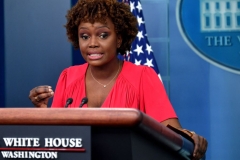 (CNSNews.com) - White House Press Secretary Karine Jean-Pierre said Monday that as a Haitian-American woman who is also a lesbian, she’s “acutely aware” that her position represents “a few firsts.”

“I am a black, gay, immigrant woman, the first of all three of those to hold this position,” Jean-Pierre said at her first press conference as press secretary, replacing Jen Psaki, who stepped down to take a job with MSNBC.

“Representation does matter. You hear us say this often in this administration, and no one understands this better than President Biden, which is why is administration is not only the most diverse in history, it is filled with barrier-breaking women and men from the vice president to cabinet secretaries, to his Supreme Court nominee to senior staff throughout this administration,” she said.

“When I did my first briefing as principal deputy press secretary last year, almost a year ago, I said at this podium that this podium, this room, this building belonged to the American people. We work for them. It’s not about me. It’s about them. It was true then, and it is very true indeed today,” Jean-Pierre said.

“I also have tremendous respect for the work that you all do, which I know it’s not easy. The press plays a vital role in our democracy, and we need a strong and independent press now more than ever. We might not see eye to eye here in this room all the time, which is okay. That give and take is so incredibly healthy, and it’s a part of our democracy, and I look forward to engaging with you all on that,” the press secretary said.