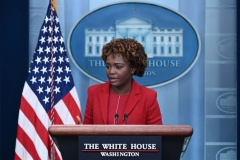 (CNSNews.com) - White House Press Secretary Karine Jean-Pierre said Wednesday that the White House is not redefining recession one day before it was reported that the GDP (Gross Domestic Product) shrank by 0.9 percent, the second quarter in which the GDP fell.

Fox News White House Correspondent Peter Doocy asked the press secretary, “So as you talk about plans on the other side, it was this president’s plans that contributed to inflation, right?”

JEAN-PIERRE: No, it was not.

JEAN-PIERRE:  — and that plan had $350 billion for public safety — another thing that Republicans talk about but they actually don’t do — and they don’t put — push forward on a policy that will help our law enforcement.

That plan helped put us in a stronger labor market and helped make our economy stronger, and so that is what is happening. It is not the president that has created inflation. There are also outside factors that has led us to where we are today.

DOOCY: If things are going so great though, then why is it that White House officials are trying to redefine "recession"?

JEAN-PIERRE: No, we’re not redefining recession.

DOOCY: If we all understand a recession to be two consecutive quarters of negative GDP growth in a row, and then you have White House officials come up here to say, “No, no, no, that’s not what a recession is, it’s something else,” how is that not redefining recession?

DOOCY: Brian Deese said in 2008, “Of course, economists have a technical definition,” which is — “of a recession, which is two consecutive quarters of negative growth.”

JEAN-PIERRE:  I can tell you this —

DOOCY: And then yesterday he said two consecutive — “two negative quarters of GDP growth is not the technical definition of recession.”

JEAN-PIERRE:  It is not.

JEAN-PIERRE:  It is not.

DOOCY: — difference, other than who the president is?

JEAN-PIERRE:  I can speak to you — to what he said yesterday, in front of all of you, which is the last thing that you just repeated.

There are many factors — there are many factors — economic factors and indicators — to consider, and I will say that the textbook definition of “recession” is not — is not two negative quarters of GDP. We have a strong labor market. We have business that’s investing. We have consumers that are also very much, you know, investing and purchasing. That is incredibly important.

In 2009, the St. Louis Fed said, “While the popular definition of a recession is ‘two consecutive quarters of negative real gross domestic product (GDP) growth,’ the NBER” — which we have mentioned many times in this room — “does not strictly abide by this designation.  Instead, the committee broadly defines a recession as a ‘significant decline in economic activity spreading across the economy lasting more than a few months.’” NBER has been around since 1920.