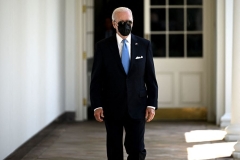 President Joe Biden arrives to deliver remarks in the Rose Garden of the White House in Washington, DC, on July 27, 2022. (Photo by BRENDAN SMIALOWSKI/AFP via Getty Images)

(CNSNews.com) - The White House downplayed a CNN poll Wednesday that showed 75 percent of Democratic voters want someone other than President Joe Biden to be their nominee.

That number is up sharply from January and February when 51 percent of Democratic voters wanted another nominee besides Biden to represent their party in the next presidential race.

“The president has said — has been clear that he intends to run, but we are so far away from that time — from, you know, even being close to — to be thinking about that, but what I can say is: We are going to continue to do the work that I just laid out, that the president is doing, lowering costs,” the press secretary said.

“We’re — we are — you know, we are — the — you saw the president’s statement on CHIPS.  That is a great step forward to investing in manufacturing, to dealing with our national security, to lowering cost for Americans. There’s the reconciliation bill that’s going to help lower cost,” Jean-Pierre said.

“There are def- — there are definitely plans that we’re going to continue to work on so we don’t leave anybody behind, and so that’s going to be his focus, and I — you know, I will say, on the other side, the — you got the MAGA congressional Republicans who are putting forth plans that’s going to take away — sunset Medicare, sunset Social Security, — increase taxes for Americans making less than $100,000 a year,” she said.
|
“That is — that is what the plan is on the other side. At least this president has a plan, and he’s doing the work on behalf of the American people,” the press secretary said.