WH Press Secretary on Twitter: ‘We’re Paying Attention to What Is in the News and … the Misinformation That’s Out There’ 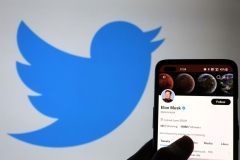 The Twitter account of Elon Musk is displayed on a smartphone with a Twitter logo in the background on November 21, 2022 in Newcastle Under Lyme, England. (Photo by Nathan Stirk/Getty Images)

(CNSNews.com) – White House Press Secretary Karine Jean-Pierre said Wednesday that the White House monitors the news and “the misinformation that’s out there” after being questioned about whether the White House would try to shut down Twitter if they see something they don’t like.

JEAN-PIERRE:  Why would we do that?

DOOCY: Well, you’re saying that you’re keeping an eye on Twitter because it might not be a suitable platform. So why use it?

JEAN-PIERRE:  Look, I want to be very clear here: The president has always said and he has been very — very clear in his belief that it is important of social media platforms to continue to take steps to reduce hate speech and misinformation, and he’ll — we’ll continue to say that, but media platforms make independent choices about their information that they present, and so, look, I don’t have anything to share on any policy or any changes that we will be making. We have multiple platforms, as you know, that we utilize to communicate with the American people.

DOOCY: When you say that you’re going to be monitoring some of the speech on there, if you see something that you don’t like, would you try to shut Twitter down?

JEAN-PIERRE:  So, look, you know, when you — when you talk about monitoring, you know, it is — I hate to break it to you, Peter: Just like everybody else, we very much monitor the news. We pay close attention to everything that you all are reporting, and — and Twitter is in the news a lot, and so that’s what we’re paying attention to. We’re paying attention to what is in the news and what is being reported on — on the misinformation that’s out there.

Let’s not forget there’s groups like NAACP, the Anti-Defamation League, and the public health leaders have been very vocal about their concerns as well. So, yes, we are reading what you all are writing and looking at what you all are reporting about the misinformation that is out there, but, you know, I would hope that all Americans, including social media companies, civil rights organizations, as I just laid out, including Fox as well, will agree that we need to — you know, we need to — to, you know, call out hate speech and misinformation.

This comes after Jean-Pierre said on Monday that the White House is “keeping an eye on” Twitter and whether it becomes a vector for misinformation.

“Just a question about Twitter.  You know, there’s a researcher at Stanford who says that this is a critical moment, really, in terms of ensuring that Twitter does not become a vector for misinformation.  I mean, are you concerned about the — you know, Elon Musk says there’s more and more subscribers coming online.  Are you concerned about that?  And what tools do you have?  Who is it at the White House that is really keeping track of this?” a reporter asked.

Again, we’re all keeping a close eye on this.  We’re all monitoring what’s — what’s currently occurring.  And we see — you know, we see it with our own eyes of what you all are reporting and, just for ourselves, what’s happening on Twitter, but again, social media companies have a responsibility to prevent their platforms from being used by any user to incite violence, especially violence directed at individual communities, as we have been seeing, and the president has been very clear on calling that out.  He’ll continue to do that, and we’re going to continue to monitor the situation.

Meanwhile, speaking to reporters outside the White House after a meeting with Biden and congressional leadership, House Minority Leader Kevin McCarthy (R-Calif.) said Tuesday that he found it “offensive” that the White House wants to keep an eye on Elon Musk’s ownership of Twitter.

“What about the White House keeping an eye on Elon Musk’s ownership of Twitter?” Doocy asked.

MCCARTHY: That is offensive to me. Government’s going to go after someone who wants to have free speech? What did he have to look at Twitter about? Do they want to go after the American public about whether they can have an opinion on something?

I think the American public has spoken on this. I think our First Amendment stands up, and I think they should stop picking on Elon Musk. Elon Musk has succeeded in many places. I’d bet on him more than government going after you, and one thing I would say when we talk about accountability, we will no longer let government go after people suffer because of their political views.