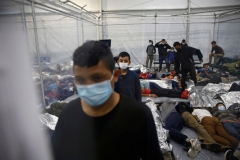 Young children stand as other rest inside a pod at the Donna Department of Homeland Security holding facility, the main detention center for unaccompanied children in the Rio Grande Valley run by the Customs and Border Patrol (CBP), in Donna, Texas on March 30, 2021. (Photo by DARIO LOPEZ-MILLS/POOL/AFP via Getty Images)

(CNSNews.com) – The White House said Friday that it is investigating claims of sexual assault of migrant children at a temporary shelter in San Antonio, Texas.

This comes after Texas Gov. Greg Abbott sent a letter to Vice President Kamala Harris on Friday, calling on the facility to be closed down after overcrowded conditions at the Freeman Coliseum in San Antonio have led to allegations of child abuse and neglect.

“Earlier this week, the Texas Health and Human Services Commission and the Texas Department of Family and Protective Services received complaints alleging child abuse and neglect inside the unaccompanied minor facility at the Freeman Coliseum in San Antonio,” Abbott wrote.

“The complaints include allegations of sexual assault, a shortage of staff to properly supervise the children inside the facility, and that the children in the facility are not eating throughout the day. The complains also allege that children who have COVID-19 are exposed to other children,” he wrote.

The governor called on the administration to close the facility and move the children to federally run facilities that “has the space, personnel, and resources to ensure their safety.”

"The State of Texas previously warned about overcrowded conditions at these facilities, and now those conditions have led to allegations of child abuse and neglect. Our repeated warnings and questions have gone ignored by President Biden, yourself, and Department of Homeland Security Secretary Mayorkas,” he wrote.

Abbott blamed the Biden administration’s “refusal to secure the border and its failure to plan for the fallout of open border policies.”

“This crisis has spiraled out of control and grows worse by the minute. However, instead of taking control of the situation, you have continued to ignore the border while making stops in Connecticut, Chicago, and California over the past several weeks,” the governor wrote.

Abbott included a memo from the Texas Department of Family and Protective Service and the Texas Health and Human Services Commission that detailed the allegations, including boys “engaging in sexual behavior in the showers,” bullying of homosexual migrant children, and “sexual acting out between children.”

When asked whether the facility will be shut down, White House Press Secretary Jen Psaki said, “First, we take safety and the well-being of children in our care very seriously, hence our earlier conversation about the funding spent to keep them safe during the pandemic. His claims will be looked into and investigated by the Department of Health and Human Services.

“Currently, we have no basis for his call to shut down the San Antonio Freeman Coliseum as an intake site, but we take these allegations seriously, and they will be investigated,” she said.

When pressed to explain how the administration’s plan to make processing migrant children more efficient and effective and in a humane way that keeps kids safe is consistent with the allegations if they are true, Psaki said, “Again, we are looking into these allegations. We take them seriously, and our focus remains on the safety and well-being of children, hence we’re looking into them and taking it very seriously.”