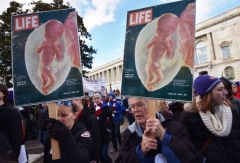 (CNSNews.com) - The White House on Wednesday condemned a Texas law that bans abortion whenever an ultrasound can detect a “heartbeat.”

The law took effect at midnight after the U.S. Supreme Court decided against taking action on an emergency appeal by Texas abortion providers on Tuesday, the Texas Tribune reported.

“Texas SB8 will impair women's access to health care and, outrageously, deputizes private citizens to sue those they believe helped another person get a banned abortion. It's a blatant violation of the right established under Roe V. Wade. We will protect and defend that right,” President Joe Biden tweeted on Wednesday.

When asked Wednesday how the administration plans to defend Roe v. Wade, White House Press Secretary Jen Psaki said, “Well, I — we put out a statement from the president this morning, but let me just reiterate some of the key points, and I will, of course, answer your question.

“As the president said this morning, the ex- — ‘This extreme Texas law blatantly violates the constitutional right established under Roe v. Wade and upheld as precedent for nearly half a century.’ It will ‘significantly impair women’s access to the health care they need, particularly for communities of color and individuals with low incomes,’” she said.

“It also ‘deputizes private citizens to bring lawsuits against anyone who they believe has helped another person get an abortion, which might even include family members, healthcare workers, front desk staff at a health care clinic, or strangers with no connection to the individual[s].’ This further isolates individuals who are facing this tough choice,” Psaki said.

“And I would note for those of you who didn’t see: People who report who — who — these private citizens could get up to $10,000 for reporting somebody who is seeking an abortion,” said the press secretary.

“So, our focus and the president’s focus is to reiterate our deep commitment to the constitutional right — of course, established by Roe v. Wade nearly five decades ago — and to continue to call for the codification of Roe, something that the president talked about on the campaign trail, the vice president talked about on the campaign trail, and this highlights even further the need to move forward on that effort,” she said.

“On abortion, some activists today noted that the statement you put out — put out on behalf of the president did not offer any specific agenda of what’s next, or, again, specifically how the administration plans to push back against the Texas law. So, I just wanted to give you a chance, if there are any specifics or internal planning, to share that now,” a reporter said.

“Well, as the president committed on the campaign trail and remains committed to now, codifying Roe v. Wade as the law of the land is something that Congress can do, he will continue to push them to do, and that is a specific course of action that can be taken to help protect from these type of lawsuits in the future,” Psaki said.

“Is there anything else beyond that?” the reporter asked.

“I can’t speak to any actions at the Department of Justice. They’re independent. I don’t have anything to preview on that front,” Psaki said.