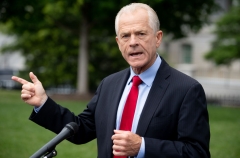 Speaking to reporters outside the White House, Navarro said the nation experienced a better economic recovery amid the pandemic than the nonpartisan Congressional Budget Office had predicted, thanks to President Donald Trump’s policies.

“I want to just make a few comments on these initial unemployment claims that came out yesterday. I had a chance to do an analysis overnight and look at what we have, and there’s a couple of points I think that are important to make for the American people. I mean first of all, what we had on the good news front very clearly is an over-performance relative to what the Congressional Budget Office said where we were going to be,” he said.

“They predicted at this point and time that we would have double digit unemployment. Clearly we’re not. Clearly we’ve been going, and we had a really faster recovery than anyone would have imagined, and it’s due to the policies of the president, but I will tell you that in looking at this data at a granular level on initial unemployment claims, there’s a disturbing pattern that is there,” Navarro said.

“You’ve got 50 states, and if you look at the top 13 states which have the highest amount of claims well into the double digits – some over 20 percent, the single greatest commonality there is that they’re all run by Democratic governors who favor lockdowns, and who have been locking down their states over the last three to four or five months more than other states,” he said.

“If you look at the bottom of the 50 states – the ones who were the best performing, the ones who had the lowest amount of people needing unemployment insurance, 14 of the 15 are led by Republican governors,” Navarro said.

“Now here’s my point. What we have is essentially, with these lockdowns are what we call in economics a regressive tax on the poor. The people who are being hurt the most by the lockdown economy of the Cuomos and the Newsoms and the Pelosis are precisely the low-income often minority communities that President Trump has done such a good job of lifting fortunes relatively,” he said.

“So I would simply issue this warning to those who are in charge of policy across these 50 states, what the data is telling us is that not only have your lockdown policies disproportionately created more pain and suffering, but it’s a regressive tax in the sense of its hurting those who are least able to handle that in terms of their situation,” Navarro added.