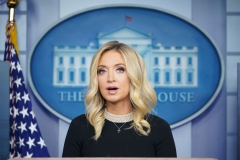 White House Press Secretary Kayleigh McEnany speaks to the press on May 15, 2020, in the Brady Briefing Room of the White House in Washington, DC. (Photo by MANDEL NGAN/AFP via Getty Images)

(CNSNews.com) - Twitter’s head of site integrity, Yoel Roth, who fact-checked President Donald Trump’s tweet on mail-in voting being subject to fraud, was not himself fact-checked when he claimed that there are “actual Nazis in the White House,” White House Press Secretary Kayleigh McEnany said Thursday.

I wanted to address what has been going on on Twitter and with social media. I believe it is time to ‘get the facts’ about Twitter and other social media platforms targeting their bias against President Trump and conservatives online. If we were to judge the bias of Twitter and its top employees by their own words, the case would be an easy one to make.

Twitter’s head of site integrity has tweeted that there are ‘actual Nazis in the White House,’ and no fact-check label was ever applied to this absolutely outrageous, offensive and false claim made against the White House and its employees, but let’s judge Twitter on its actions not based on the words of its top employees, and its actions are no better.

President Trump recently received a so-called fact-check label based for a tweet. It was a false fact-check, an inaccurate fact-check, but nevertheless Twitter moved forward with it. Dan Scovino, the deputy chief of staff here, was the first user in the history of Twitter to receive a so-called ‘manipulated media’ label for posting a video that played a verbatim clip.

It is no coincidence that these two unbelievable interventions by Twitter were targeted against the president of the United States and one of the president’s top advisers. This is bias in action, and while Big Tech is quick to censor the president, quick to censor some of his top employees, they are very reluctant it seems to label some of the actions by Chinese officials, some of the misinformation that has been spread by China.

For example, to move off of Twitter and move onto Google, they created a search engine for the Chinese Communist Party which blacklisted searches for human rights and allowed for easy surveillance.

And then back in March, a Chinese official began spreading a conspiracy theory on Twitter, an egregious one, that our U.S. military was responsible for the spread of the coronavirus, and that tweet, that disinformation it took all the way until today when we raised concerns about it to get a fact-check.

So they appear to be very hastily eager to censor President Trump and some of his employees but a little reluctant when it comes to China. It’s a bit befuddling, but no one believes in the First Amendment more than the president. The president will take action to ensure that Big Tech does not stifle free speech and that the rights of all Americans to speak, tweet and post are protected.

McEnany cited a Newsbusters blog from April 18, 2019, which analyzed social media reaction to the Mueller report when it was released last year.

“Out of the 112 tweets presented in the six Twitter moments, 76 were anti-Trump in content and/or intent, while 35 tweets were merely quotes from the report itself,” the article stated.

“Finally, I just want to note one other I learned just before walking out here that on the Mueller report, their anti-Trump headlines were anti-Trump by a ratio of 76 to one. That's extraordinary, and it’s not just bias aimed at President Trump and his employees. It’s also aimed at everyday Americans,” McEnany said.

“It's aimed at the movie ‘Unplanned’ as Twitter suspended their accounts and came up with an excuse in the aftermath. Just another example, that liberals are allowed to incite violence against the Covington kids who were in the end proven right, and their video was taken out of context and yet these individuals were allowed by Twitter to incite violence. It’s very disturbing,” she added.