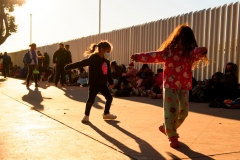 Children play as families of asylum seekers wait outside the El Chaparral border crossing port as they wait to cross into the United States in Tijuana, Baja California state, Mexico on February 19, 2021. (Photo by PATRICK T. FALLON/AFP via Getty Images)

As CNSNews.com previously reported, Psaki told reporters on Tuesday that the facility was being used to maintain social distancing.

“We spoke yesterday about immigration and this HHS facility in Carrizo Springs, Texas, for migrant children, and you said it’s not kids in cages. We’ve seen some photos now of containers. Is there a better description? Is it kids in containers instead of kids in cages? What is the White House’s description of this facility?” Fox News White House Correspondent Peter Doocy asked Psaki at the White House press briefing on Wednesday.

PSAKI: Let me give a broader description of what’s happening here. We have a number of unaccompanied minors – children who are coming into the country without their families. What we are not doing, what the last administration did was separate those kids, rip them from the arms of their parents at the border. We are not doing that. That is immoral, and that is not the approach of this administration.

These kids, we have a couple of options. We can send them back home and do a dangerous journey back. We are not doing that either. That is also putting them at risk. We can quickly transfer them from CBP to these HHS-run facilities. That’s one option. Or we can put them with families and sponsors without any vetting. There were some problems that that process ran into as well.

We’ve chosen the middle option, and these HHS facilities – this is one of them you’re referring to – we had to expand and open additional facilities, because there was not enough space in the existing facilities, and we were to abide by COVID protocols. That’s the process and the step. This facility in Texas, which has been reopened, has been revamped, has been – there are teachers. There is medical facilities, and our objective is to move these kids quickly from there to vetted, sponsored families and to places where they can safely be. This is a difficult situation. It’s a difficult choice. That’s the choice we’ve made.

DOOCY: so just one step back from that. We’ve been talking to people down at the border who say that right now DHS and the Border Patrol are using the same kind of facilities now that they did during the Trump administration. There’s a facility right now. It’s in Donna, Texas, instead of McAllen, Texas, but it’s tents and chain link fence around it, and so –

PSAKI: A CBP facility before they’re transferred to the HHS facility? Is that what you’re referring to?

DOOCY: Yes. And the issue would be that just in the last couple days, they had hundreds of kids that they were holding for over 72 hours, which is the legal limit to keep somebody in a temporary facility, so I’m just curious why this is happening.

PSAKI: Let’s be clear though, ‘cause I know you want to be clear with the public about the differences. The CBP facilities, which you’re right. The objective is to move kids, unaccompanied minors as quickly as possible, under 72 hours to these HHS-sponsored facilities, which is the one where we’ve been referring to in Texas. They are two different things. There were some delays last week because of weather and because some of these facilities did not have power and were not in a place where they had the capacity to take in these kids and do it safely. That is not our objective. That is not our goal, so some unfortunately did stay four days, five days or longer, but the objective is to move them as quickly as possible to the HHS-sponsored facilities.

DOOCY: Has the White House seen the comment from Alexandria Ocasio-Cortez who, speaking about that HHS facility in Carrizo Springs, said this is not okay, never has been okay, never will be okay no matter the administration or party?

PSAKI: I think the difficulty is – I haven’t seen the full context of the quote or interview of the tweet that she shared, but I would say the difficulty is what I outlined earlier. We have kids coming across the border. It is heart-breaking. I think we all as human beings are heartbroken, as parents, as mothers, as fathers too. We only have a couple of choices. What we are not doing is dividing these kids and separating them from their parents at the border, which is what the last administration did, and why President Biden or then-candidate Biden and then-candidate Harris were outspoken at the time about these kids being pulled from their parents.

What we are doing is working as quickly as possible to process these kids into these HHS facilities, which have been revamped, which have medical and educational services available so that we can then transfer them to families. That’s what our approach is.

PSAKI: I think you’d have to talk to the Department of Homeland Security about that. There are obviously safety protocols about that, privacy concerns, but I certainly encourage you to reach out about that.