WH: We Were Not Aware of Attorney General’s Decision to Name a Special Counsel into Trump Investigations 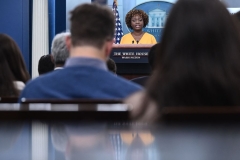 White House Press Secretary Karine Jean-Pierre speaks during the daily press briefing in the Brady Briefing Room of the White House in Washington, DC, on November 18, 2022. (Photo by BRENDAN SMIALOWSKI/AFP via Getty Images)

(CNSNews.com) - The White House said Friday that it was not aware of Attorney General Merrick Garland’s decision to name a special counsel to oversee the investigations into former President Trump.

As CNSNews.com reported, Garland named Jack Smith special counsel to oversee the investigation into whether anyone or any entity “unlawfully interfered with the transfer of power following the 2020 presidential election or the certification of the electoral college vote held on or about January 6, 2021” and “the investigation involving classified documents and other presidential records as well as the possible obstruction of that investigation.”

“So first I can just tell you no, he was not aware,” White House Press Secretary Karine Jean-Pierre said when asked whether President Biden was aware of the attorney general’s decision. “We were not aware. As you know, the Department of Justice makes decisions about its criminal investigation independently.

“We are not involved. We have not been aware about this particular investigation or any criminal investigation. I would refer you to the Department of Justice on any questions on this, but again, we were not given advance notice. We were not aware of this investigation,” she said.

Jean-Pierre offered “no reaction” from the president.

The former president said that he hopes the Republicans “have the courage to fight this” and that he is “not going to partake in this.”

"I have been proven innocent for six years on everything — from fake impeachments to [former special counsel Robert] Mueller who found no collusion, and now I have to do it more?" Trump said. "It is not acceptable. It is so unfair. It is so political."

“I have never heard of such a thing. They found nothing. I announce and then they appoint a special prosecutor,” he said Friday. “They found nothing, and now they take some guy who hates Trump. This is a disgrace and only happening because I am leading in every poll in both parties.”

“On the appointment of the special counsel today, former President Trump reacted to this news in an interview, calling this ‘the worst politicization of justice.’ He said that this was an unfair and political decision. I’m wondering if you have a response to that,” CNN White House Correspondent Jeremy Diamond asked.