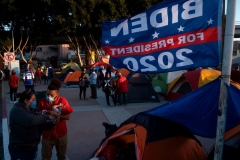 A flag supporting US President Joe Biden is seen at a migrant camp outside El Chaparral in Tijuana, Mexico, on February 25, 2021. - Migrants cross through the port hopping to arrive to the United States. (Photo by GUILLERMO ARIAS/AFP via Getty Images)

(CNSNews.com) – The Biden administration is reportedly considering the use of a military base in Virginia to house unaccompanied minors amid an increased influx of illegal immigrants across the U.S.-Mexico border.

According to Reuters, a Pentagon spokesperson confirmed that Fort Lee, a U.S. Army base located south of Richmond, is being considered.

When asked whether she can confirm that the base will be used to house unaccompanied minors, White House Press Secretary Jen Psaki said Friday that the Biden administration recognizes “the challenge” of preparing for the influx of illegal immigrant children, but she refused to confirm the use of “additional facilities at this point.”

“As we’ve just been talking about, obviously, we recognize the challenge of having these unaccompanied children come across the border and the influx that we’re certainly preparing for and preparing to approach,” the press secretary said.

“So of course we have to look for facilities and places where we can safely and humanely have these unaccompanied minors in the interim. That would be the decision of HHS, so I would send you to them, but I don’t have anything to confirm in terms of additional facilities at this point,” she added.

The press secretary was asked whether President Joe Biden is concerned that some of his rhetoric and immigration policies may have “inadvertently contributed to the rise in migrants” at the border, in particular unaccompanied children, and whether he has any intention of more forcefully telling migrants that now is not the time to come to the U.S., as DHS Secretary Alejandro Mayorkas said last week.

“As the secretary also said last week … this is a message we are conveying with every opportunity from the president, the vice president, from officials in the region, and we’re doing that with the full support of course of the Department of Homeland Security and all resources that we have available,” Psaki said.

“I will say that the big difference, which we certainly understand the outcome may be an influx, as we’ve seen of more children if you are kicking children out, there’s naturally by design – I’m no mathematician – going to be more children who come in, because we believe that policy was inhumane, and we believe that children who are under the age of 18 should be treated with humanity and provided safety, what we consider while the process is moving forward,” she said.

“So we certainly have a different approach. We understand the outcome and the impact of that, but we are using every tool at our disposal, and we will use every official we can to convey clearly this is not the time to come. The majority of people who come are turned away – families, adults. We’re really talking about children, which as I know what you were referencing,” Psaki said.

When asked whether she believes that part of that rise has to do with some of Biden’s policies and rhetoric, the press secretary said, “I certainly didn’t say that exactly, but all I’m conveying is that obviously we’re going to have more kids across the—in the country since we have been letting unaccompanied minors stay and the last administration immorally kicked them out in our view.”